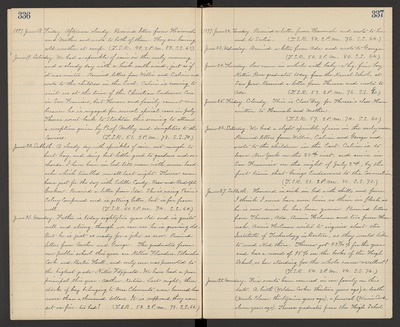 June 19. Saturday. We had a sprinkle of rain in the early morning and a cloudy day with a brisk south wind, just as if it was winter. Received letters from Willie and Calvin and wrote to the children in the East. Calvin is coming to visit us at the time of the Christian Endeavor Corr. in San Francisco, but Horace and family cannot come because he is engaged for several special cases in July. Theresa went back to Stockton this evening to attend a reception given by Prof. Mobley and daughters to the Seniors. (T.S.R. 51. 2 P.M. 73. S.S. 70.)

June 20. Sabbath. A cloudy day with sprinkles of rain, not enough to hurt hay, and doing but little good to gardens and orchards. I have been in bed till noon with severs headache which troubled me all last night. Theresa came home just for the day with Estelle Condy, Rosa and Rudolph Gnekow. Received a letter from Ida. She is using Paine's Celery Compound and is getting better, but is far from well. (T.S.R. 60. 2 P.M. 74. S.S. 60.)

June 21. Monday. Father is today eightytwo years old and is quite well and strong, though we can see he is growing old. But he is just as ready for a joke as ever. Received letters from Mother and George. The graduates from our public school this year are Nellie Flanders, Blanche Cook and Bertic Heull, and only one was promoted to the highest grade - Nellie Fitzgerald. We have had a poor principal this year - Arthur Norton. Last night three stacks of hay belonging to Mrs. Clements, were burned-loss more than a thousand dollars. It is supposed they were set on fire - too bad! (T.S.R. 58. 2 P.M. 78. S.S. 64.)

June 26. Saturday. We had a slight sprinkle of rain in the early morn. Received letters from Willie, Calvin and George and wrote to the children in the East. Calvin is to leave New York on the 28th inst. and arrive in San Francisco on the night of July 2nd, by the first train that brings Endeavorers to the Convention. (T.S.R. 51. 2 P.M. 80. S.S. 70.)

June 27. Sabbath. Howard is sick in bed with chills and fever. I think I never have seen him so thin in flesh as he is now since he has been grown. Received letters from Theresa, Ada, Annie Holman and two from Hannah. Annie Holman writes to inquire about the Institute of Technology in Boston, as they would like to send Ned there. Theresa got 93 7/10% for the year and has a record of 95% on the books of the High School, as her standing for the whole course - excellent! (T.S.R. 54. 2 P.M. 84. S.S. 74.)

June 28. Monday. Five events have occurred in our family on this date. A birth (Weldon Cooke thirteen years ago), a death (Uncle Elmer thirtynine years ago), a funeral (Winnie Cook eleven years ago), Theresa graduates from the High School