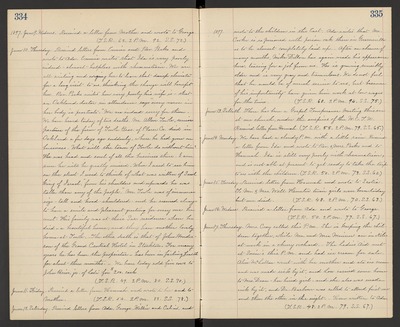 June 10. Thursday. Received letters from Eunice and Rev. Perks and wrote to Ada. Eunice writes that Ida is very poorly indeed almost helpless with rheumatism. We are all writing and urging her to leave that damp climate for a long visit to us, thinking the change will benefit her. Rev. Perks writes how very poorly his wife is - that an Oakland doctor in attendance says "every nerve in her body is prostate." We are indeed sorry for them. We have heard today of two deaths. Mr. Allen Towle, senior partner of the firm of Towle Bros. of Placer Co. died in Oakland a few days ago suddenly, where he had gone on business. What will the town of Towle do without him? He was head and soul of all the business there. I am sure he will be greatly missed. When I used to see him on the street I used to think of what was written of Saul, king of Israel, "from his shoulders and upwards he was taller than any of the people." Mr. Towle was of immerse size - tall and broad - shouldered - and he seemed always to have a smile and pleasant greeting for everyone he met. His family was at their Sac. residence when he died - a beautiful home; and they have another lovely home at Towle. The other death is that of John Henderson of the Grand Central Hotel in Stockton. For many years he has been the proprietor - has been in failing health for about three months. - We have today sold five cows to John Brier, Jr. of Lodi for $200. cash (T.S.R. 49. 2 P.M. 80. S.S. 70.)

1897. wrote to the children in the East. Ada writes that Mr. Cooke is so poisoned with poison oak there in Greeneville as to be almost completely laid up. After an absence of many months, Mike Dillon has again made his appearance here, teasing for a job from us. He is growing sensibly older and is very gray and tremulous. We do not feel that he would be of much service to us, but because of his importunity have given him work at low wages for the time. (T.S.R. 60. 2 P.M. 94. S.S. 75.)

June 17. Thursday. Mrs. Crey called this P.M. She is keeping the children together, while Mr. and Mrs. Minner are in Niles at work in a cherry orchard. The Ladies Aid met at Susie's this P.M. and had ice cream for sale. Alice McLellan went with her mother and ate ice cream and was made sick by it, and Lou carried some home to Mrs. Dean - her hired girl and she also was made sick by it, and Dr. Barbour was called to attend first one and there the other in the night. Have written to Ada. (T.S.R. 48. 2 P.M. 79. S.S. 67.)