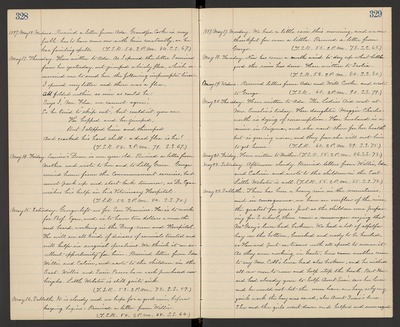 May 13. Thursday. Have written to Ada. As I opened the letter I received from her yesterday, out jumpED a lively flea, which occasioned me to send her the following impromptu lines; I opened my letter and there was a flea, All folded within as nice as could be; Says I, 'Mr. Flea, we cannot agree', So he tried to "skip out", but couldn't, you see, He hopped and he jumped, But I stopped him and trumped And cracked his hard shell - a dead flea is he! (T.S.R. 50. 2 P.M. 79. S.S. 67.)

May 14. Friday. Eunice's Dean is one year old. Received a letter from Mother and wrote to her and to Lilly Greve. George arrived home from the Commencement exercises, but must pack up and start back tomorrow, as Dr. Egan wishes his help in his Veterinary Hospital. (T.S.R. 52. 2 P.M. 84. S.S. 70.)

May 15. Saturday. George left us for San Francisco. He is to work for Prof. Egan, and is to have ten dollars a month and board, working in the Drug-room and Hospital. He will see all kinds of diseases of animals treated and will help in surgical operations. We think it an excellent opportunity for him. Received letters from Ida Willie and Calvin, and wrote to the children in the East. Willie and Susie Pascoe have each purchased new bicycles. Little Webster is still quite sick. (T.S.R. 53. 2 P.M. 73. S.S. 57.)

May 20. Thursday. Have written to Ada. The Ladies Aid met at Mrs. Emslie's today. Her daughter Maggie Charlesworth is dying of consumption. Her husband is a miner in Arizona, and she went there for her health but is growing worse, and they fear she will not live to get home. (T.S.R. 60. 2 P.M. 89. S.S. 75.)

May 23. Sabbath. There has been a heavy rain in the mountains, and in consequence, we have an overflow of the river, the greatest for years. Just as the children were preparing for S. school, there come a messenger saying that McGary's levee had broken. We had a lot of alfalfa hay on the bottom, bunched and ready to be hauled, so Howard put on teams with all speed to secure it. As they were working in haste, here came another man to say Mrs. Cobb's levee had also broken, and he wished all our men to come and help stop the break. But Howard had already gone to help Aunt Susie save her levee and he would not let the men leave our hay, so by very quick work the hay was saved, also Aunt Susie's levee. She and the girls went down and helped and encouraged