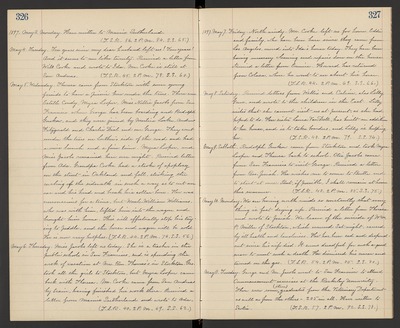 May 5. Wednesday. Theresa came from Stockton with some young friends to have a picnic here under the trees. There were Estelle Condy, Myra Looper, Miss Nellie Jacobs from San Francisco where George has been boarding and Rudolph Gnekow, and they were joined by Mertice Locke, Andrew Fitzgerald and Charlie Dial and our George. They went under the trees on Luther's side of the road and had a nice lunch and a fine time. Myra Looper, and Miss Jacobs remained here over night. Received letter from Ada. Grandpa Cooke had a stroke of apoplexy on the street in Oakland and fell, sticking the curbing of the sidewalk in such a way as to cut an ear and his head and break his collar-bone. He was unconscious for a time, but Uncle William Williams, who was with him, lifted him into the wagon and brought him home. This will effectually stop his trying to peddle, and the horse and wagon will be sold. He is now very helpless. (T.S.R. 44. 2 P.M. 74. S.S. 56.)

May 6. Thursday. Miss Jacobs left us today. She is a teacher in the public schools in San Francisco, and is spending the week of vacation at Mrs. Ben. Thomas's in Stockton. Geo. took all the girls to Stockton, but Myra Looper came back with Theresa. Mr. Cooke came from San Andreas by train, having finished his work there. Received a letter from Mannie Sutherland and wrote to Ada. (T.S.R. 40. 2 P.M. 69. S.S. 62.)

1897. May 7. Friday. North windy. Mr. Cooke left us for home. Eddie and family, who have been here since they came from Los Angeles, moved into Ida's house today. They have been having necessary cleaning and repairs done on the house. Received a letter from Eunice. Howard has returned from Colusa, where he went to see about his horse. (T.S.R. 44. 2 P.M. 69. S.S. 66.)

May 8. Saturday. Received letters from Willie and Calvin, Also Lilly Greve, and wrote to the children in the East. Lilly writes that she cannot visit us at present, as she had hoped to do. Her sister Laura VanDell, has built an addition to her house, and is to take boarders, and Lilly is helping her. (T.S.R. 48. 2 P.M. 79. S.S. 74.)

May 9. Sabbath. Rudolph Greekow came from Stockton and took Myra Looper and Theresa back to school. Otis Jacobs came from San Francisco to visit George. Received a letter from Bro. Josiah. He wishes me to come to Butte and to start at once. But, if possible, I shall remain at home this summer. (T.S.R. 48. 2 P.M. 85. S.S. 75.)

May 10. Monday. We are having north winds so constantly that every thing is fast drying up. Received a letter from Theresa and wrote to Josiah. We learn of the suicide of Wm. P. Miller of Stockton, which occurred Sat. night, caused by ill health and loneliness. He has been sad and despondent since his wife died. It seems dreadful for such a good man to meet such a death. He dismissed his nurse and turned on the gas. (T.S.R. 54. 2 P.M. 85. S.S. 80.)

May 11. Tuesday. George and Mr. Jacobs went to San Francisco to attend Commencement exercises at the Berkeley University. There were some (three) graduates from the Veterinary Department as well as from the others - 205 in all. Have written to Scotia. (T.S.R. 57. 2 P.M. 92. S.S. 78.)