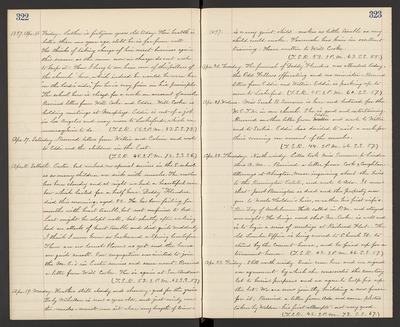 1897. Apr. 16. Friday. Luther is fortyone years old today. His health is better than one year ago, still he is far from well. He thinks of taking charge of his meat business again this season as the men now in charge do not wish to keep it. How I long to see him one of the "pillars of the church" here, which indeed he would be were he "on the Lord's side", for he is very firm in his principles. The school here is closed for a week on account of measles. Received letters from Will Cooke and Eddie. Will Cooke is holding meetings at Murphys. Eddie is out of a job in Los Angeles and may move to Lockeford, Which we encourage him to do. (T.S.R. 55. 2 P.M. 83. S.S. 73.)

Apr. 18. Sabbath. Easter, but we had no special services in the S. School as so many children are sick with measles. The weather has been cloudy and at night we had a beautiful rainbow which lasted for a half hour. "Daddy" Flanders died this morning, aged 82. He has been failing for months with heart trouble, but not confined to bed. Last night he slept well, but shortly after waking had an attack of heart trouble and died quite suddenly I think I never knew so backward a Spring here before. There are no locust blooms as yet and the leaves are quite small. Our congregation was invited to join the M.E.'s in Easter services and some went. Received a letter from Will Cooke. He is again at San Andreas. (T.S.R. 53. 2 P.M. 63. S.S. 57.)

Apr. 19. Monday. Weather still cloudy and showery, good for the grain. Baby McLellan is now a year old, and just nicely over the measles, cannot even sit alone any length of time.

Apr. 20. Tuesday. The funeral of "Daddy" Flanders was attended today, the Odd Fellows officiating and no minister. Received letters from Eddie and Willie. Eddie is packing up to move to Lockeford. (T.S.R. 45. 2 P.M. 60. S.S. 57.)

Apr. 21. Wednes. Miss Sarah B. Severance is here and lectured for the W.C.T.W. in our church. She is good and entertaining. Received another letter from Eddie and wrote to Willie and to Scotia. Eddie has decided to wait a week for their coming on account of the measles. (T.S.R. 44. 2 P.M. 66. S.S. 57.)

Apr. 22. Thursday. North windy. Lilla took Miss Severance to Linden this A.M. Received a letter from Cook, Coughlan Attorneys at Abington, Mass, inquiring about the heirs to the Remington Estate, and wrote to Ada. It seems that Jacob Remington is dead and the property now goes to Uncle Holden's heirs, or rather his first wife's. Rev. Day of Mokelumme Hill called in P.M. and stayed over night. He brings word that Mr. Cooke is well and is to begin a series of meetings at Railroad Flat. The old Lumber Office is being moved to Church St. to stand by the cement house, and be fixed up for a tenement house. (T.S.R. 43. 2 P.M. 66. S.S. 57.)

Apr. 23. Friday. Still north windy. Susie came here and we signed an agreement by which she consecrates the cemetery lot to burial purposes and we agree to help fix up the lot. We are now jointly building a new fence for it. Received a letter from Ada and some photos taken by Weldon. his first attempts not very good. (T.S.R. 42. 2 P.M. 73. S.S. 67.)