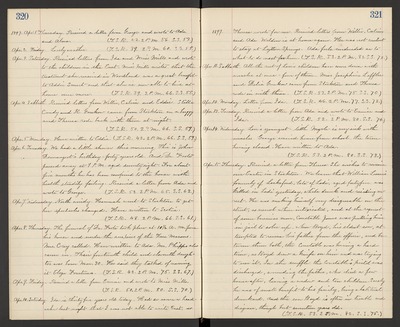 Apr. 3. Saturday. Received letters from Ida and Miss Mills and wrote to the children in the East. Miss Mills writes that the treatment she received in Woodland was a great benefit to Addie Smart and that she is now able to live at home once more. (T.S.R. 39. 2 P.M. 66. S.S. 55.)

Apr. 6. Tuesday. We had a little shower this morning. This is John Demangeot-s birthday - forty years old. And Dr. Foote passed away at 7 P.M. aged seventy eight. For about five months he has been confined to the house with health steadily failing. Received a letter from Ada and wrote to George. (T.S.R. 52. 2 P.M. 65. S.S. 62.)

Apr. 10. Saturday. Ida is thirty five years old today. Had so severe a headache last night that I was not able to write East, so

Apr. 15. Thursday. Received a letter from Theresa She wishes to remain over Easter in Stockton. We learn that William Loomis formerly of Lockeford, late of Lodi, aged fortyfive, was killed in Lodi yesterday, while drunk and resisting arrest. He was making himself very disagreeable on the street, as usual when intoxicated, and at the request of some business men, Constable Jones was putting him in jail to sober up, when Boyd, his eldest son, attempted to rescue his father from the officer, and between them both, the Constable was having a hard time, as Boyd drew a knife on him and was trying to use it. In the scuffle the Constable's pistol was discharged, wounding the father, he died a few hours after, leaving a widow and ten children. Surely he was of small benefit to his family, being a habitual drunkard. And the son Boyd is often in trouble and disgrace, though but seventeen years old. (T.S.R. 53. 2 P.M. 82. S.S. 75.)