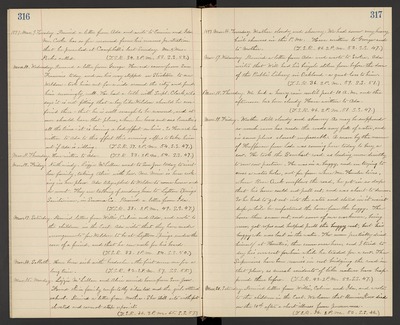 Mar. 10. Wednesday. Received a letter from George Howard came from San Francisco today and on his way stopped in Stockton to see Weldon - took him out for a ride around the city and finds him seemingly well. He had a talk with Supt. Clark, who says it is not fitting that a boy like Weldon should be confined there - that he is well enough to be removed, and at once should leave that place, where he hears and sees lunatics all the time it is having a bad effect in him. So Howard has written to Ada to this effect this evening. offers to take him out if Ada is willing. (T.S.R. 37. 2 P.M. 54. S.S. 47.)

Mar. 12. Friday. North windy. Lizzie McLellan went to San Jose today to visit her family, taking Alice with her. Mrs. Mines is here cooking in her place. Ada telegraphed to Weldon to come home and he went. They are talking of sending him to Lytton Springs Sanitarium, in Sonoma Co. Received a letter from Ida. (T.S.R. 33. 2 P.M. 49. S.S. 47.)

Mar. 13. Saturday. Received letters from Willie, Calvin and Ada, and wrote to the children in the East. Ada writes that they have made arrangements for Weldon to be at Lytton Springs under the care of a friend, and that he can work for his board. (T.S.R. 33. 2 P.M. 54. S.S. 50.)

Mar. 15. Monday. Lizzie McLellan and Alice arrived home from San Jose. Found their family comfortably situated and the girls attended school. Received a letter from mother. She still sits with foot elevated and cannot step upon it. (T.S.R. 36. 2 P.M. 65. S.S. 57.)

Mar. 19. Friday. Weather still cloudy and showery. As may be supposed so much rain has made the roads very full of water, and in some places almost impassable. A man by the name of Huffman from Lode was coming here today to buy a cow. He took the Barnhart road as leading more directly to our cow pasture. He was in a buggy, and in trying to cross a water hole, not far from where Mr. Hunter lives, where Bear creek overflows the road, he got in so deep that his house could not pull out, and was about to drown. So he had to get out into the water and stand in it waist deep while he unfastened the horse from the buggy. The horse then swam out, and some of our workmen, being near, got ropes and helped pull the buggy out, but his buggy robe was lost in the water. The man partially diced himself at Hunter's, then came over here, and I tried to dry his over coat for him while he traded for a cow. The Supervisors have been remiss in not bridging the road in that place, as several accidents of like nature have happened there before. (T.S.R. 42. 2 P.M. 52. S.S. 47.)