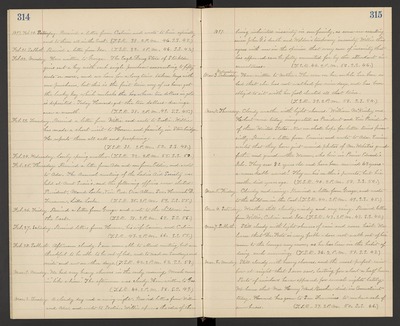 Feb. 22. Monday. Have written to George. The Eagle Drug Store of Stockton Gives out a key with each single purchase amounting to fifty cents or more, and we have for a long time taken keys with our purchases, but this is the first time any of us have got the lucky key which unlocks the box where ten dollars in gold is deposited. Today Howard got the ten dollars drawings once a month. (T.S.R. 31. 2 P.M. 49. S.S. 45.)

Feb. 25. Thursday. Received a letter from Ada and one from Eddie, and wrote to Ada. The Annual meeting of the Ladies Aid Society was held at Aunt Susie's, and the following officers were elected: President, Maud Locke, Vice Pres. Ora Allen, Sec, Hannah D. Treasurer, Lilla Locke. (T.S.R. 35. 2 P.M. 59. S.S. 55.)

Mar. 2 Tuesday. A cloudy day and a rainy night. Received letters from Willie and Ada, and wrote to Scotia. Willie spurns the idea of there

1897. being inherited insanity in our family, as some are asserting since John G.'s death and Weldon's temporary insanity. Willie thus agrees with me in the opinion that every case of insanity that has appeared can be fully accounted for the attendant circumstances. (T.S.R. 44. 2 P.M. 50. S.S. 46.)

Mar. 4. Thursday. Cloudy weather with light showers. William McKinley and Hobart were today inaugurated as President and Vice President of these United States. Now we shall hope for better times financially. Received a letter from Eunice and wrote to Ada. Eunice writes that they have just received photos of Mr. Webster's grandfather and grandmother Warren, who live in Prince Edward's Isle. They are 82 years old and have been married 63 years a remarkable record! They are his mother's parents, but his mother died years ago. (T.S.R. 40. 2 P.M. 58. S.S. 50.)

Mar. 8. Monday. Still cloudy with heavy showers, and the most perfect rainbow at night that I ever saw, lasting for about a half hour. Parts of rainbows have appeared for several nights lately. We learn that Mrs. Henry Ward Bucher died in Connecticut today. Howard has gone to San Francisco to make a sale of some horses. (T.S.R. 37. 2 P.M. 50. S.S. 46.)