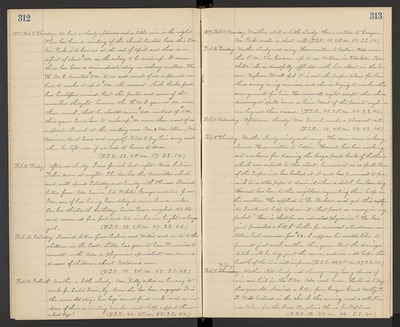 Feb. 12. Friday. Afternoon cloudy. I was feverish last night. Miss Lilian Taber came at night. She teaches the Macville school and will spend Saturday and Sunday with Theresa. Received letters from Ada, Eunice, Ed. Webster, George and Two from Ida, one of hers having been delayed somewhere a week. On her thirteenth birthday, Susie Pascoe weighed 102 lbs. and measured five feet and two inches in height a large girl. (T.S.R. 38. 2 P.M. 47. S.S. 46.)

Feb. 13 Saturday. Received letters from Calvin and Willie and wrote to the children in the East. Lilla has gone to San Francisco to consult with Ada a physician specialist on nervous diseases of children, about Weldon's case. (T.S.R. 38. 2 P.M. 55. S.S. 48.)

Feb. 16. Tuesday. Weather cloudy and rainy. Have written to Scotia. Ada came this P.M. She has come up to see Weldon in Stockton. Poor child! she is dreadfully afflicted with her eldest in the Insane Asylum. We all feel it is not the proper place for him there among saving maniacs, and she is trying to make other arrangements for him. He seems all right except when those discouraged "spells" come on him Most of the private asylums are beyond their means. (T.S.R. 49. 2 P.M. 54. S.S. 46.)

Feb. 18. Thursday. Weather cloudy, windy and rainy. The rain came in heavy showers. Have written to Eddie. Howard has been working out a scheme for draining the large pond back of Luther's which now extends to the street, because it is so full. One of the Supervisors has looked at it and has promised to furnish terracotta pipe to drain it, when a ditch has been dug. Howard has been to the neighbors, requesting their help in the matter. He applied to Dr. Barbour, and got this reply. "No, I will not help to drain it that pond is money in my pocket". How is that for an educated physician? He has just presented a bill to Luther for medical attendance on Nellie last summer, for $50. I suppose he would like to present just such another this year. But the drainage ditch will be dug, just the same, and we will hope the health of the tower will improve. (T.S.R. 44. 2 P.M. 47. S.S. 45.)