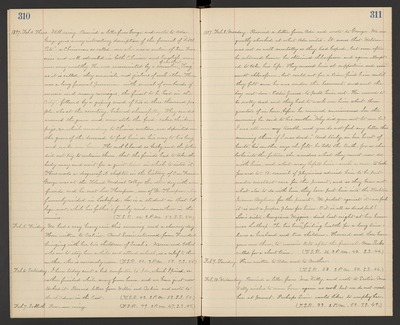 1897. Feb. 4. Thurs. Still rainy. Received a letter from George and wrote to Ada. George gives a very interesting description of the funeral of "Little Pete" - a Chinaman so called - one who was a native of San Francisco and well educated in both Chinese and English, more over very wealthy. He was assassinated by a member of another "Tong" as it is called, they are rivals, and jealous of each other. There was a long funeral procession with several of our bands of music and many carriages, the finest to be had in the City, followed by a gaping crowd of two or three thousand people, who at the cemetery, behaved shamefully. They crowded around the grave and even stole the food, cakes, chickens, pigs, x.c. which according to Chinese custom, are deposited on the grave of the deceased to feed him on his way to his long and unknown home. The mob behaved so badly, and the police did not try to restrain them, that the friends had to take the body away and wait for a quiet time in which to inter it. Thus reads a disgraceful chapter in the history of San Francisco George was at the Toland Medical College the other day with some friends, and he met Lee Thompson, son of Dr. Thompson who formerly resided in Lockeford. Lee is a student in that College now, while his father's family reside somewhere in the mines. (T.S.R. 44. 2 P.M. 52. S.S. 50.)

Feb. 5. Friday. We had a very heavy rain this morning and a showery day. Have written to Calvin. Aunt Susie returned from Ferndale bringing with her two children of Sarah's. Warren and Ethel who are to stay here awhile and attend school, as a relief to their mother, who is nervously worn. (T.S.R. 50. 2 P.M. 58. S.S. 55.)

Feb. 6. Saturday. I have today sent a bed comforter to Ida, which I pieced, or rather finished while away from home, and we have just now tacked it. Received letters from Willie and Calvin and wrote to the children in the East. (T.S.R. 42. 2 P.M. 58. S.S. 50.)

1897. Feb. 8. Monday. Received a letter from Ada and wrote to George. We are greatly shocked at what Ada writes. It seems that Weldon was not so well mentally as they had hoped, but soon after he returned home he obtained chloroform end again attempted to take his life. They missed him at suppertime and soon smelt chloroform, but could not for a time find him until they felt sure he was under the basement, and sent the boy next door Eddie James to pull him out. He seemed to be really dead and they had to work over him about three quarters of an hour, before he recovered consciousness. In the morning he said to his mother, "Why did you not let me be? I was all over my trouble, and you do not feel any better this morning than if I was dead". And truly, in her heart of hearts, his mother says she felt he told the truth, for as she looks into the future, she wonders what they most now do with him, and what may befall him such as care to look forward to. A council of physicians advised him to be put under constant care for the present, and as they knew not what else to do with him, they have put him into the Stockton Insane Asylum for the present. We protest against it we feel it is not a proper place for him. O it is all so dreadful! Lou's sister. Georgiana Wiggins died last night at her home near Lathrop. She has been in failing health for a long time leaves a husband and two children. Howard and Lou have gone over there, to remain till after the funeral. Mrs. Perks called for a short time. (T.S.R. 36. 2 P.M. 48. S.S. 46.)