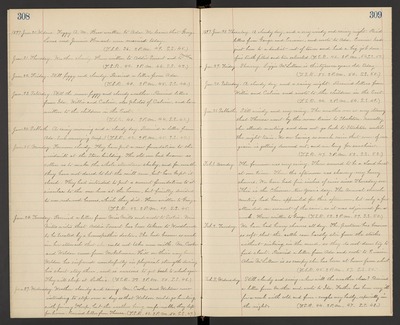 Jan. 25. Monday. Forenoon cloudy. They have put a new foundation to the windmill at the store building. The old one had become so rotten as to make the whole structure shaky, and for months they have not dared to let the mill run, but have kept it closed. They had intended to put a cement foundation to it similar to the one here at the house, but finally decided to use redwood beams, which they did. Have written to George. (T.S.R. 43. 2 P.M. 49. S.S. 45.)

Jan. 26. Tuesday. Received a letter from Miss Mills and wrote to Scotia. Miss Mills writes that Addie Smart has been taken to Woodland to be treated by a homeopathic doctor. She had become so weak in her stomach that she could not take even milk. Mr. Cooke and Weldon cause from Mokelumne Hill on their way home Weldon has improved wonderfully in physical strength during his short stay there, and is anxious to get back to school again. They will sleep at Luther's. (T.S.R. 33. 2 P.M. 50. S.S. 46.)

Jan. 27. Wednesday. Weather cloudy and rainy. Mr. Cooke and Weldon were intending to stop over a day so that Weldon could go hunting with Jimmy Thorp, but the weather being unfavorable, troy left for house. Received letter from Theresa. (T.S.R. 42. 2 P.M. 50. S.S. 47.)

Jan. 31. Sabbath. Still windy and very rainy. The weather was so very stormy that Theresa went by the noon train to Stockton. Usually she attends meeting and does not go back to Stockton until the night train. We are having so much rain that some of our grain is getting drowned out, and we long for sunshine. (T.S.R. 47. 2 P.M. 52. S.S. 52.)

Feb. 1. Monday. The forenoon was very rainy. There seemed to be a cloud-burst at one time. Then the afternoon was showery - very heavy showers. We have had five inches of rain since Thursday eve. This is the Chinese New Year's day. The Annual church meeting had been appointed for this afternoon, but only a few attended on account of the rain, so it was adjourned for a week. Have written to George. (T.S.R. 52. 2 P.M. 59. S.S. 50.)

Feb. 2. Tuesday. We have had heavy showers all day. The pasture has become so soft that the cattle can hardly stir from the stacks without sinking in the mud, so they do not dare try to feed about. Received a letter from Ada and Wrote to Eunice. Alice McLellan is so croupy she has been at home from school. (T.S.R. 45. 2 P.M. 57. S.S. 50.)

Feb. 3. Wednesday. Still cloudy and rainy when will the weather clear? Received a letter from mother and wrote to Ida. Father has been very ill for a week with cold and fever - coughs very badly, especially in the night. (T.S.R. 44. 2 P.M. 47. S.S. 48.)