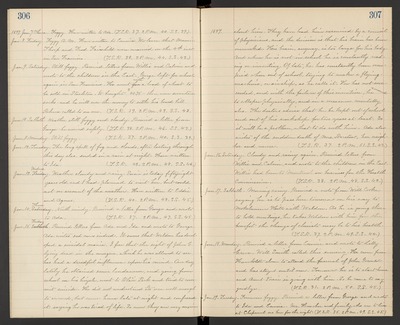 Jan. 9. Saturday. Still foggy. Received letters from Willie and Calvin and wrote to the children in the East. George left for school again in San Francisco. He went with a load of wheat to be sold in Stockton. It brought $40.75 - there were seventeen sacks - and he will use the money to settle his board bill. Rebecca called to see me. (T.S.R. 39. 2 P.M. 43. S.S. 42.)

Jan. 15. Friday. Received letters from Ada and Ida and wrote to George. Ada writes sad news indeed. It seems that Weldon has developed a suicidal mania. I fear that the sight of John G. lying dead in the morgue, which he was allowed to see has had a dreadful influence upon his mind. One day lately he obtained some laudanum, and going from school on his bicycle, went to Blair Park and tried to commit suicide. He did not understand its use well enough to succeed, but came home late at night and confessed it, saying he was tired of life. So now they are very anxious

1897. about him. They have had him examined by a council of physicians, and the decision is that his brain has been overworked. His brain, anyway, is too large for his body. And when he is not in school he is constantly reading or inventing. Of late, he has constantly been occupied when out of school, trying to make a flying machine, or air ship, as he calls it. He has not succeeded, and with the failure of this invention, he seemed to collapse physically, and in a measure, mentally also. The doctors advise that he be kept out of school and out of his workshop for two years at least. So it will be a problem, what to do with him. Ada also writes of the sudden death of Mrs. Barstow, her neighbor and nurse. (T.S.R. 37. 2 P.M. 51. S.S. 43.)

Jan. 16. Saturday. Cloudy and rainy again. Received letters from Willie and Calvin, and wrote to the children in the East. Willie had been to Montreal on business for the Health Commission. (T.S.R. 38. 2 P.M. 48. S.S. 42.)

Jan. 17. Sabbath. Morning rainy. Received a note from Will Cooke saying he is to pass here tomorrow on his way to Mokelumne Hill with Weldon. As he is going there to hold meetings, he takes Weldon with him for the benefit the change of climate may be to his health. (T.S.R. 37. 2 P.M. 49. S.S. 44.)

Jan. 18. Monday. Received a letter from Eunice and wrote to Lilly Greve. Will Smith called this evening. He came from Humboldt alone to attend the funeral of John Gerould and has stayed until now. Tomorrow he is to start home and Aunt Susie is going with him. So he came to say goodbye. (T.S.R. 31. 2 P.M. 50. S.S. 45.)