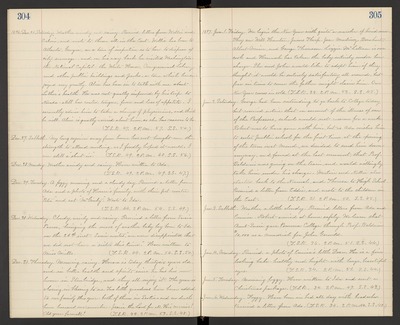 1896. Dec. 26. Saturday. Weather windy and rainy. Received letters from Willie and Calvin, and wrote to them all in the East. Willie has been to Atlanta, Georgia, on a tour of inspection as to how to dispose of city sewerage, and on his way back he visited Washington the National Capital the White House, Congressional Library, and other public buildings and parks - a tour which he enjoyed very greatly. Alice has been in to talk with me about Luther's health. He was not greatly improved by his trip to Nevada - still has coated tongue, fever and loss of appetite. I earnestly advise him to take a change of physicians, and think he will. Alice is greatly worried about him, as she has reason to be. (T.S.R. 47. 2 P.M. 57. S.S. 54.)

Dec. 31. Thursday. Morning rainy. Horace is today thirtysix years old, and in better health and spirits since he has his new home in Sturbridge, and they all enjoy it. The year is closing in blessing to us. Two little grandsons have been added to our family this year - both of them in Scotia and no deaths have lessened our member - praise the Lord for all His mercies! Old year farewell! (T.S.R. 42. 2 P.M. 53. S.S. 48.)

1897. Jan. 1. Friday. We begin the New Year with quite a number of hired men. They are Will Hunter, James Thorp, Jose Martinez, Barnhart, Albert Miner, and George Thomson, Lizzie McLellan is our cook and Hannah has taken the baby entirely under her charge. She and John would like to adopt him, if they thought it would be entirely satisfactory all around, but fear in time to come the father might claim him, Our New Year comes in cold. (T.S.R. 28. 2 P.M. 52. S.S. 45.)

Jan. 2. Saturday. George had been intending to go back to College today but received notice that on account of the illness of one of the Professors, school would not resume for a week. Robert was to have gone with him, but as Ada wishes him to enter public school for the first time, at the opening of the term next Mond., we decided to send him down anyway, and found at the last moment, that Prof. Baldwin was going on the train, and would willingly take him under his charge. Mertice and Nettie also started back to the Normal, and Theresa to High School. Received a letter from Eddie, and wrote to the children in the East. (T.S.R. 31. 2 P.M. 50. S.S. 45.)