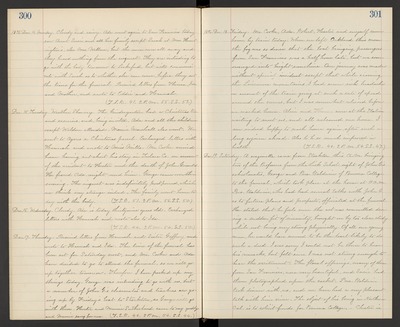 1896. Dec. 14. Monday. Cloudy and rainy. Ada went again to San Francisco today saw Aunt Susie and all her family except Sarah at Mrs. Huntington's, also Mrs. Wallace, but the men were all away and they heard nothing from the inquest. They are intending to go with the body tomorrow to Lockeford, but will communicate with Sarah as to whether she can come, before they set the time for the funeral. Received letters from Theresa, Ida and Mother, and wrote to Eddie and Hannah. (T.S.R. 41. 2 P.M. 55. S.S. 53.)

Dec. 15. Tuesday. Weather Showery. The kindergarten had a Christmas tree and exercises, and, being invited. Ada and all the children except Weldon attended. Mannie Marshall also went. We sent to Agnes a Christmas parcel. Exchanged letters with Hannah and wrote to Miss Mills. Mr. Cooke arrived home having cut short his stay in Tulare Co. on account of the accident to Hester and the death of John Gerald. He feared Ada, might need him. George came over this evening. The inquest was indefinitely postponed, which we think very strange indeed. The family went home to day with the body. (T.S.R. 51. 2 P.M. 56. S.S. 50.)

Dec. 17. Thursday. Received letters from Hannah and Sister Geffroy and wrote to Hannah and Ida. The time of the funeral has been set for Saturday next, and Mr. Cooke and Ada have decided to go to attend the funeral, so we will go up together tomorrow. Therefore I have packed up my things today. George was intending to go with us. but a number of John G's classmates and teachers are going up by Friday's boat to Stockton, so George will go with them. Hester and Mannie Sutherland came to say goodbye and Mamie song for me. (T.S.R. 46. 2 P.M. 54. S.S. 44.)

1896. Dec. 18. Friday. Mr. Cooke, Ada, Robert Hester and Myself came home by train today. When we left Oakland this mom the fog was so dense that the boat bringing passengers from San Francisco was a half hour late, but we soon emerged into bright sunshine. Our journey was made without special incident except that while crossing the Livermore mountains, I had severe sick headache on account of the train going at such a rate of speed around the curves, but I was somewhat relieved before we reached home. Alice and Theresa Were at the Station waiting to meet us, and all welcomed me home. I am indeed happy to reach home again, after such a long sojourn abroad. Also to be so much improved in health. (T.S.R. 40. 2 P.M. 54. S.S. 47.)

Dec. 19. Saturday. A wagonette came from Stockton this A.M. bringing two of the Professors from the Lick School eight of John G's schoolmates, George and Pres. Baldwin of Pomona College to the funeral, which took place at the house at 11 A.M. Pres. Baldwin, who had had several talks with John G. as to future plans and prospects, officiated at the funeral. He stated that he feels sure the act was committed during a sudden fit of insanity, brought on by too close study while not being very strong physically. Of all our young men, he would have seemed to be the least likely to do such a deed. I was sorry I could not be then to hear his remarks, but felt sure I was not strong enough to bear the excitement. The floral offerings, many of them from San Francisco, were very beautiful, and Susie had then photographed upon the casket. Pres, Baldwin took dinner with us, and we have had a very pleasant talk with him since. The object of his being in Northern Cal. is to solicit funds for Pomona College. Chester is