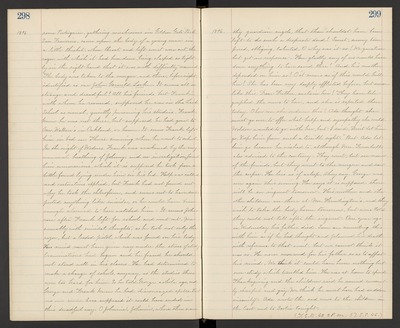 1896. some Portuguese, gathering mushrooms in Golden Gate Park, San Francisco, came upon the body of a young man in a little thicket, whose throat and left wrist were cut, the razor with which it had been done, being clasped so tightly in the right hand that it was with difficulty removed. The body was taken to the morgue, and there, before night, identified as our John Gerould Locke. It seems all so strange and dreadful! All his friends but Frankie with whom he roomed, supposed he was in the Lick School as usual, quietly pursuing his studies. Frank knew he was not there, but supposed he had gone to Mrs. Wallace's in Oakland, or home. It seems Frank left him in bed on Thurs. morning when he went to school. In the night of Wednes. Frank was awakened by the very unusual breathing of Johnny, and on investigating formed him unconscious, which it is supposed he took from a bottle found lying under him in his bed. Help was called and restoratives applied, but Frank had not found out why he took the chloroform, and seems not to have suspected anything like suicide, or he would have been enough alarmed to have watched him. It seems John rose after Frank left for school and went out, presumably with suicidal thoughts, as he took not only the razor, but a loaded pistol, which was found on his body. His mind must have given way under the stress of study. Examinations had began and he feared he should not stand well in his classes. He had determined to make a change of schools, anyway, as the studies there were too hard for him. So he told George a while ago, and George and Frank knew he had discouraged spells. But no one could have supposed it could have ended in this dreadful way. O Johnnie, Johnnie, where there were

1896. thy guardian angels, that those shouldn-t have been left to do such a desperate deed! Sweet, sunny tempered, obliging, talented, O why was it so! We question but get no response. How gladly any of us would have done anything to have saved thee! And his mother depended on him so! O it seems as if this would kill her! She has been very deeply afflicted before, but never like this. Dear Father, sustain her! They have telegraphed the news to her, and she is expected there today. O how can she endure this! Ada thought she must go over, to offer what help and sympathy she could. Weldon wanted to with her, but I said, "Dont let him go. Keep him from such a terrible sight". But Ada let him go because he wished to, although Mrs. Trumbull also advised to the contrary. They went, but saw none of the friends, but they went to the morgue and saw the corpse, He lies as if asleep, they say. George was over again this evening. He says it is supposed there will be an inquest tomorrow. His mother and the other children are there at Mr. Huntington's, and they wish to take the body home tomorrow, but were told they could not till after the inquest. One year ago on Wednesday his father died. Some are connecting this with him as if he had thought and planned his death with reference to that event, but we cannot think it was so. He never mourned for his father so as to affect his mind. We think it could have been nothing but over - study which troubled him. He was at home to spend Thanksgiving and the children said he seemed unusually cheerful and gay. We think he must have had sudden insanity. Ada wrote the sad news to the children in the East and to Scotia tonight. (T.S.R. 42. 2 P.M. 57. S.S. 46.)