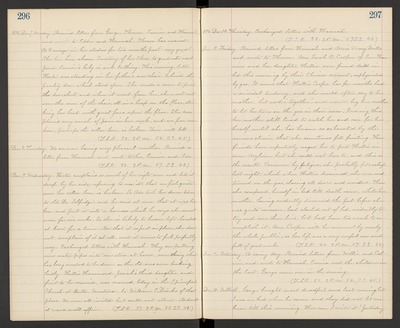 1896. Dec. 7. Monday. Received letters from George. Theresa, Eunice and Hannah and wrote to Eddie and Hannah. Theresa has received 96% average in her studies for two months past - very good! She has been chosen Secretary of her Class, to graduate next June. Eunice's baby is sick teething. This evening, little Hester was standing in her father's armchair behind the pantry door, which stood open. She made a move to push the door shut, and when it went from her, she went out over the arm of the chair, all in heap on the floor, striking her head with great force upon the floor. She complains very much of pain in her neck, and we fear some bone, perhaps the collar bone, is broken. Time will tell. (T.S.R. 32. 2 P.M. 54. S.S. 45.)

Dec. 9. Wednesday. Hester complains so much of her right arm and lets it droop by her side, refusing to use it that we feel quite sure her collar bone is broken. So Ada took her down town to old Dr. Selfridge, and he said at once that it was broken and just it into a harness which he says she must wear for six weeks. So she is likely to become left handed at least for a time. Now that it is put in place, she does not complain of it at all, and it seems to feel perfectly easy. Exchanged letters with Hannah. They are putting new water pipes into our stove at home, something that has long needed to be done, as the old ones were leaking badly. Hattie Hammond, Josiah's third daughter, and first to be married, was married today in the Episcopal Church at Butte, Montana, to William C. Dierks of that place. We were all invited but could not attend. No doubt. it was a small affair. (T.S.R. 37. 2 P.M. 55. S.S. 48.)

Dec. 11. Friday. Received letters from Hannah and Miss Mary Mills and wrote to Theresa. Mrs. Sarah B. Cooper of San Francisco and her daughter Hattie were found dead in bed this morning by their Chinese servant, asphyxiated by gas. It seems that Hattie Cooper has for months had a suicidal tendency, and she would often say to her mother, "Let us die together" and would beg her mother to let her turn on the gas in their room. Knowing this her mother still tried to watch her and care for her herself, until she has become so exhausted by the Nervous strain, that she sometimes fell fainting. Her friends have repeatedly urged her to put Hattie in some Asylum, but she could not bear to, and this is the result. Overcome by fatigue, she probably fell asleep last night, which when Hattie discovered, she rose and turned on the gas, closing all doors and windows. Then she composed herself in bed till death came, while her mother, having evidently discovered the fact before she was quite overcome, had started out of bed, evidently to try and save their lives, but had been too weak to accomplish it. Mrs. Cooper will be mourned by nearly the whole public, as her life was a very useful one and full of good works, (T.S.R. 40. 2 P.M. 57. S.S. 50.)

Dec. 13. Sabbath. George brought most dreadful news last evening, but I was in bed when he came and they did not let me know till this morning. How can I write it! Yesterday