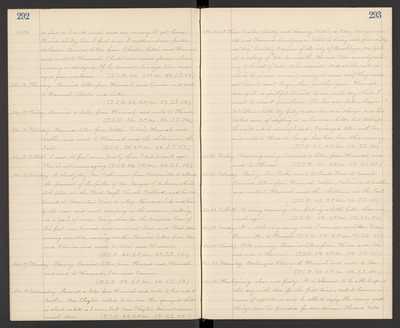 1896. as fast as I could wish, and am uneasy to get home. It is so chilly here, I feel sure I could improve faster at home. received letters from Chester, Lottie and Hannah and wrote to Hannah. Chester now wears glasses when reading or studying. If he does not, his eyes turn cross-eyed from weakness. (T.S.R. 45. 2 P.M. 58. S.S. 52.)

Nov. 16. Monday. A cloudy day. Mr. Cooke came from Watsonville to attend the funeral of the father of Rev. Burgess of Auburn, which took place at the First Congl. Church, Oakland, and he was buried at Mountain View cemetery. He was a hale and hearty old man and went camping in the summer, putting on a pair of coarse, heavy shoes for the purpose. One of his feet was bruised and would not heal, and blood-poisoning resulted, causing death. Received letters from Ida and Theresa, and wrote to Alice and Hannah. (T.S.R. 48. 2 P.M. 68. S.S. 60.)

1896. Nov. 19. Thurs. Weather cloudy and showery. Willie is today thirty one yrs. old and Hannah twenty nine. Willie is doing well financially as Chief Sanitary Engineer of the city of Brooklyn, New York, at a salary of $200. per month. per month. He and Etta are only waiting to be out of debt, to be married. And at the rate at which he is now earning money, it seems as if they would not have to wait longer than another year. Hannah, dear girl, is faithful to write to me each day, while I must be absent from home. She has now taken Lizzie McLellan's little boy fully under her own charge, and has talked some of adopting it as her own child, but perhaps this will not be accomplished. Exchanged letters with her and wrote to Howard. George has been here this evening. (T.S.R. 48. 2 P.M. 54. S.S. 50.)

Nov. 26. Thanksgiving - clear and frosty. It is pleasant to be able to spend this day with Ada for the first time, and to have an increase of appetite so as to be able to enjoy the many good things Ada has provided for our dinner. She and Will