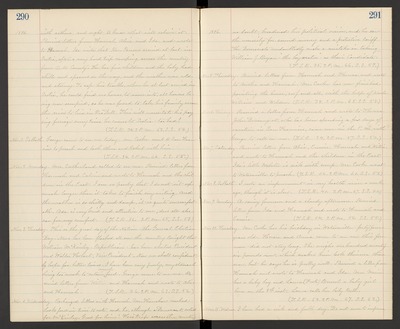 1896. with asthma, and ought to know what will relieve it. Received letters from Hannah, Alice and Ida, and wrote to Hannah. Ida writes what Rev. Parsons arrived at last in Scotia, after a very hard trip camping across the country from Butte County. He has five children and the baby had chills and spasms on the way, and the weather was cold and stormy. To cap is troubles, when he at last arrived in Scotia, he could find no house to move into, all houses being now occupied, so he was forced to take his family across the river to live in Rio Dell. This well necessitate his paying ferriage every time he comes to Scotia too bad! (T.S.R. 34. 2 P.M. 63 S.S. 54.)

Nov. 2. Monday. Mrs. Sutherland called to see me. Received letters from Hannah and Calvin and wrote to Hannah and the children in the East. I am so poorly that I do not sit up much longer than it takes to finish my writing. And the weather is so chilly and damp, it is quite uncomfortable. Ada is very kind and attentive to me, does all she can for my comfort. (T.S.R. 36. 2 P.M. 65 S.S. 58.)

Nov. 3. Tuesday. This is the great day of the Nation the General Election Day. News has been flashed all over the country tonight that William McKinley - Republican - has been elected President and Walter Hobart, Vice President. Now we shall confidently hope for better times. I have been very poorly, my stomach being too weak to retain much food. George come to see me. Received letters from Willie and Hannah and wrote to Alice and Hannah. (T.S.R. 36. 2 P.M. 63 S.S. 56.)

Nov. 4. Wednesday. Exchanged letters with Hannah. Mr. Henshaw watched Locks ford in time to vote, and he although a Democrat, voted from McKinley. Good for him! His trip across the country

Nov. 5. Thursday. Received letters from Hannah and Theresa and wrote to Mother and Hannah. Mr. Cooke has now finished painting the house, roof and all, with the help of Uncle William and Weldon. (T.S.R. 38. 2 P.M. 65. S.S. 58.)

Nov. 10. Tuesday. Mr. Cooke has his birthday in Watsonville - forty four years old. Horace and Anna came to see me this forenoon did not stay long. She weighs one hundred seventy six pounds now, which makes him look thinner than ever, but he says he is pretty well. Received a letter from Hannah and wrote to Hannah and Ida. Mrs. Menir has a baby boy and Laura (Foote) Bruml a baby girl born on the 8th inst. Laura calls her baby Ruth. (T.S.R. 52. 2 P.M. 67. S.S. 63.)

Nov. 11. Wednes. I have had a sick and feeble day. Do not seem to improve