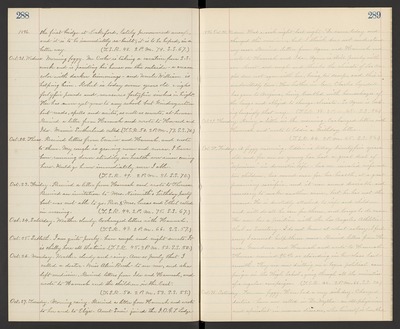 Oct. 21. Wednes Morning foggy. Ms. Cooke is taking a vacation from S.S. work and is painting his house on the outside - a cream color with darker trimmings - and Wessle William is helping him. Robert is today seven years old weighs forty five pounds and measures forty five inches in height. He has never yet gone to any school but kindergarten but reads, spells and writes, as well as counts, at home. Received a letter from Hannah and wrote to Howard and Ida. Mamie Sutherland called. (T.S.R. 50. 2 P.M. 77. S.S. 70.)

Oct. 22. Thurs. Received letters from Eunice and Hannah, and wrote to them. My cough is growing worse and worse. I have been running down steadily in health ever since coming here. Would go home immediately were I able. (T.S.R. 49. 2 P.M. 81. S.S. 70.)

Oct. 27. Tuesday. Morning rainy. Received a letter from Hannah and wrote to her and to Eliza. Aunt Susie joined the I.O.G.T. Lodge

1896. Oct. 28. Wednes. Had a sick night last night. Dr. came today and changed the medicine, but I think does not understand my case. Received letters from Agnes and Hannah and wrote to Hannah and Ida. Agnes is still poorly with sore throat and cough and thinks the climate of Los Angeles does not agree with her, being too damp, and this is undoubtedly true. Her brother-in-law, Charles Lyndall, has gone to Arizona, being troubled with hemorrhages of the lungs and obliged to change climate. So Agnes is looking longingly that way. (T.S.R. 38. 2 P.M. 65. S.S. 56.)

Oct. 30. Friday. A foggy morning. Eddie is today twenty five years old and for one so young has had a great deal of "experience" in domestic life - has an invalid wife and two children, has moved once for her health, at a great pecuniary sacrifice, and it now seems desirable and necessary to make another move, but he has not the means. He is devotedly attached to wife and children and will do all he can for them, and longs to do more. He now has a position with the Los Angeles Athletic club as Secretary - I do not know at what salary. I feel sorry I cannot help them more. Received letters from Theresa, Grandma and Hannah and wrote to Hannah. Theresa received 96% as standing in her class last month. They are now drilling on a bogus political campaign in the High School, going through all the minutiae of a regular campaign. (T.S.R. 46. 2 P.M. 66. S.S. 54.)

Oct. 31. Saturday. Forenoon foggy. Have had a very sick day. Changed doctors - have now called in Dr. Wythe - an old physician and specialist in nervous diseases, who himself is troubled