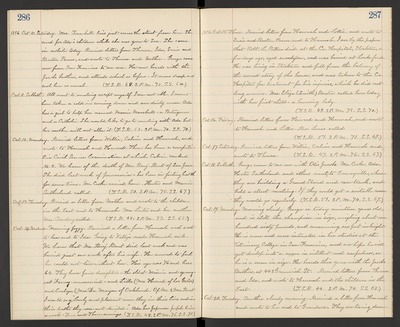 1896. Oct. 10. Saturday. Mrs. Trumbull lives just across the street from here. She cared for Ada's Children while she was gone to Sac. She came in awhile today. Received letters from Theresa, Ida, Susie and Benton Pascoe, and wrote to Theresa and Mother. George came over from Sam Francisco to see me. He now boards with the Jacobs brothers, and attends school as before. It seems damp and cool here as usual. (T.S.R. 48. 2 P.M. 70. S.S. 64.)

Oct. 11. Sabbath. All went to meeting except myself. I am not able. I must have taken a cold in coming down and am daily worse. Ada has a girl to help her named Mamie Marshall - a Portuguese and a Catholic. She would like to go to meeting with Ada but her mother will not allow it (T.S.R. 52. 2 P.M. 70. S.S. 70.)

Oct. 12. Monday. Received letters from Willie, Calvin and Hannah, and wrote to Hannah and Howard. There has been a competitive Civil Service Examination at which Calvin ranked No. 2. We learn of the death of Mrs. Benj. Burt of San Jose. She died last week of pneumonia - has been in failing health for some time. Mr. Cooke arrived home. Hester and Mamie Sutherland called. (T.S.R. 50. 2 P.M. 75. S.S. 67.)

Oct. 14. Wednes. Morning foggy. Received a letter from Hannah and Wrote to her and to Ida. Going to Vallejo made Hannah sick. We learn that Mr. Benj. Burt died last week and was buried just one week after his wife. He seemed to feel he could not live without her. His age was 76 and hers 64. They leave four daughters-the oldest Minnie and youngest Fanny - unmarried - and Lilla (Mrs. Herrod of Los Gatos) and Evelyn (Mrs. Dr. Mayon of Oakland. Of Mr. & Mrs. Burt I would say, "Lovely and pleasant were they in their lives and in their deaths they were not divided". Ada has Japanese pupils twice a week - Tues. and Thurs. evenings. (T.S.R. 48. 2 P.M. 75. S.S. 71.)

1896. Oct. 15. Thurs. Receive letters from Hannah and Lottie, and wrote to Susie and Benton Pascoe and to Hannah. I see by the papers that Robt. L. Patton died at the Co. Hospital, Stockton, a few days ago, aged seventyone, and was buried at Lockeford. He was living in Stockton and fell from the balcony of the second story of the house, and was taken to the Co. Hospital for treatment for his injuries, which he did not long survive. Mrs. Eliza (Smith) Baxter called here today with her first child - a bouncing baby. (T.S.R. 49. 2 P.M. 78. S.S. 70.)

Oct. 18. Sabbath. George came to see me with Otis Jacobs. Ms. Cooke Ada, Hester Sutherland and others went to Emoryville, where they are building a Grand Stand and race track, and held a street meeting. If they could get a suitable room they would go regularly. (T.S.R. 51. 2 P.M. 74. S.S. 67.)

Oct. 19. Monday. Morning cloudy. George is today nineteen years old, and is till the champion in size. weighing about one hundred sixty pounds, and measuring six feet in height. He is more and more interested and his studies at the Veterinary College in San Francisco, and we hope he will yet develop into a man in intellect and usefulness, as he is a man in size. He boards this year with the Jacobs Brothers, at 442 Greenwich St. Received letters from Theresa and Ida, and wrote to Hannah and the children in the East. (T.S.R. 44. 2 P.M. 74. S.S. 68.)

Oct. 20. Tuesday. Another cloudy morning. Received a letter from Hannah and wrote to her and to Grandma. They are tearing down