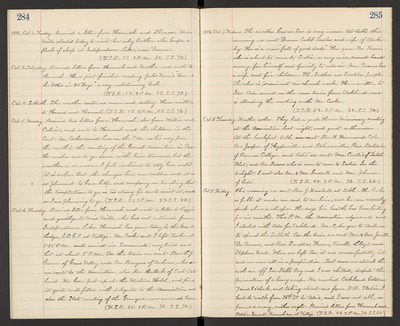 Oct. 5. Monday. Received two letters from Hannah, also from Willie and Calvin, and wrote to Hannah and the children in the East. Mr. Cooke arrived here in the P.M. on his way from the north to the meeting of the General Association in Sac. He wishes me to go down with him tomorrow, but the weather is so warm I feel inclined to stay here until it is cooler. But the changes here are sudden and it is so pleasant to have help and company in traveling that the temptation to go is too strong for one to resist it, and so I am planning to go (T.S.R. 51. 2 P.M. 83. S.S. 80.)

Oct. 6. Tuesday. Received letter from Hannah and wrote a letter to Lizzie and goodbye to Miss Mills, who has not returned from Independence Lake. Hannah has gone today to the Grand Lodge, I.O.G.T. at Valleys. Mr. Cooke and I left Towle at 1:35 P.M. and arrived in Sacramento, very tired and hot at about 5 P.M. On the train we met Rev. L.J. Garver of Grass Valley and Rev. Burgess of Auburn, who are en route to the Association, also Rev. Halleck of East Oakland. We have put up at the Western Hotel, and find it quite well filled with delegates to the Association and also the State meeting of the Geangers, now convened here. (T.S.R. 48. 2 P.M. 76. S.S. 74.)

1896. Oct. 7. Wednes. The weather here in Sac is very warm. At table this morning we met Deacon Caleb Sadler and wife of Berkeley. He is a man "full of good deeds". He gave Rev. Parsons who is about to move to Scotia, a very nice, second-hand survey, for himself and family to ride in. Mr. Parsons has a wife and five children. The Sadlers are Eastern people. She also is prominent in church work. Have written to Ida. Ada arrived on the noon train from Oakland, and is attending the meeting with Mr. Cooke. (T.S.R. 52. 2 P.M. 82. S.S. 74.)

Oct. 8. Thursday. Weather cooler. They had a good Home Missionary meeting at the association last night, and great enthusiasm. At the breakfast table we asset Rev. H. Hammond Cole, Rev. Jasper of Hydesville and Rohnerville, Pres. Baldwin of Pomona College, and later on met Mrs. Curtis of Dutch Flat, and Rev. Parsons who is soon to move to Scotia. In the Twilight, I met also Mr. & Mrs. Goodsell and Mrs. Johnson of Lodi. (T.S.R. 48. 2 P.M. 76. S.S. 64.)

Oct. 9. Friday. This Morning we met Rev. J. Kimball at table. He looks so feeble it made me sad to see him, and he can scarcely speak above a whisper. He says his health has been failing for six months. This P.M. the Association adjoined and I started with Ada for Oakland. Mr. Cooke goes to Auburn to spend the Sabbath. On the Train we met Mr. & Mrs. Jewett, Dr. Mooar, and Rev. Scudder, Frear, Rowell, Lloyd and Stephen Wood. When we left Sac. it was uncomfortably hot and we were all in a perspiration. But soon we struck the cool air off San Pablo Bay and I was chilled, despite the precaution of a heavy wrap. We reached Oakland between 7 and 8 o'clock, and taking street cars form R.R. Station, I had to walk from 36th St. to Ada's, and I was not able, so passed a weary, restless night. Received letters from Hannah and Addie Smart. Hannah was at Vallejo. (T.S.R. 48. 2 P.M. 74. S.S. 64.)