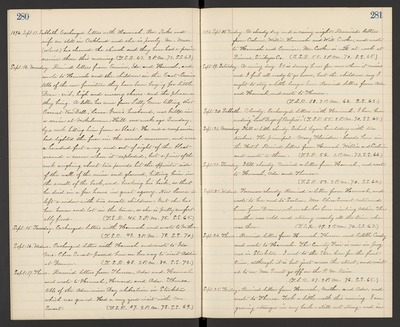 Sept. 14. Monday. Received letters from Eunice, Ida and Hannah, and wrote to Hannah and the children in the East. Eunice tells of the new furniture they have been buying for little Dean - crib, high and nursery chairs - and the pleasure they bring. A letter has come from Lilly Greve telling that Earnest Van Dell, Laura Greve's husband, was killed in a mine at Mokelumne Hill one week ago Sunday, by a rock hitting him from a blast. He and a companion had lighted the fuse in the usual manner, and were a hundred feet away and out of sight of the blast around a curve when it exploded, but a piece of the rock weighing about two pounds hit the opposite side of the wall of the mine and glanced, hitting him in the small of the back, and breaking his back, so that he died in a few hours in great agony. Now Laura is left a widow with two small children. But she has her house and lot in the town, so she is pretty comfortably fixed. (T.S.R. 45. 2 P.M. 75. S.S. 65.)

Sept. 17. Thurs. Received letters from Theresa, Ada and Hannah and wrote to Hannah, Howard and Ada. Theresa Tells of the Admission Day celebration in Stockton which was grand. Had very good visit with Mrs. Smart. (T.S.R. 47. 2 P.M. 78. S.S. 69.)

Sept. 23. Wednes. Forenoon cloudy. Received a letter from Hannah, and wrote to her and to Scotia, Mrs. Eben Smart returned home from Donner, where she has been visiting Addie. The weather was cold and stormy nearly all the time she was there. (T.S.R. 49. 2 P.M. 70. S.S. 63.)

Sept. 24. Thurs. Received letters from Hannah, Theresa and Estelle Condy and wrote to Hannah. The County Fair is now in progress in Stockton. I went to the Store here for the first time, although it is but just across the street, and waited to see Mrs. Smart go off on the P.M. train. (T.S.R. 47. 2 P.M. 76. S.S. 65.)

Sept. 25. Friday. Received letters from Hannah, Mother and Ada, and wrote to Theresa. Took a little walk this morning. I am growing stronger in my back - still not strong and in