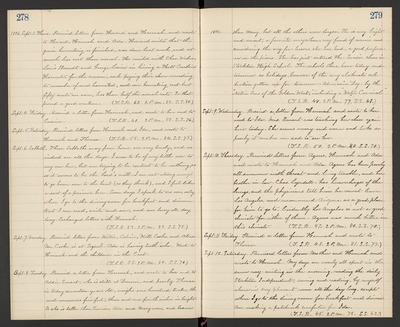 1896. Sept. 3. Thurs. Received letters from Howard and Hannah, and wrote to Howard, Hannah and Ada. Howard writes that the grain harvesting is finished, was done last week, and at much less cost than usual. He united with Chas. Weber, Louis Brandt and George Linn in hiring a Holt Combined Harvester for the season, each paying their share according to number of acres harvested, and our harvesting cost but fifty cents an acre, less than half the usual rate. So that proved a good venture. (T.S.R. 63. 2 P.M. 88. S.S. 80.)

Sept. 6. Sabbath. These Sabbaths away from home are very lonely, and so indeed are all the days. I seem to be of very little use to any one here, but am trying to be content to be nothing, as so it seems to be the Lord's will. I am not strong enough to go home now to the heat (so they think), and I feel like a sort of a prisoner here. Some days I speak to no one, only when I go to the dining room for breakfast and dinner. But I can read, write and sew, and am busy all day long. Exchanged letters with Hannah. (T.S.R. 53. 2 P.M. 83. S.S. 75.)

Sept. 8. Tuesday. Received a letter from Hannah, and wrote to her and to Addie Smart, who is still at Donner and poorly. Theresa is today seventeen years old, weighs one hundred twelve lbs. and measures five feet, three and one-fourth inches in height. So she is taller than Eunice, Ada and Mary were, and heavier

1896. than Mary, but all the others were larger. She is very bright and smart, a favorite everywhere, very fond and music and considering the very few lessons she has had, a good performer on the piano. She has pist entered the Senior class in Stockton High School. The schools there have today and tomorrow as holidays, because of the very elaborate celebration gotten up for tomorrow. Admission Day - by the "Native Sons of the Golden West", including a "Water Carnival" (T.S.R. 48. 2 P.M. 77. S.S. 68.)

Sept. 10. Thursday. Received letters from Agnes, Hannah and Ada and wrote to Hannah and Ada. Agnes has been poorly all summer with throat and lung trouble, and her brother-in-law-Chas. Lyndall - has hemorrhages of the lungs, and the physicians tell him he must leave Los Angeles, and recommend Arigona as a good place for him to go to. Evidently Los Angeles is not a good climate for either of them. Agnes was much better in this climate. (T.S.R. 47. 2 P.M. 80. S.S. 70.)

Sept. 12. Saturday. Received letters from Mother and Hannah and wrote to Hannah. My days are nearly all spent in the same way - writing in the morning, reading the daily Stockton Independent, sewing and reading, by myself alone in my pleasant room all the day long, except when I go to the dining room for breakfast and dinner. Am Making a patchwork comforter for Ida. (T.S.R. 45. 2 P.M. 78. S.S. 62.)