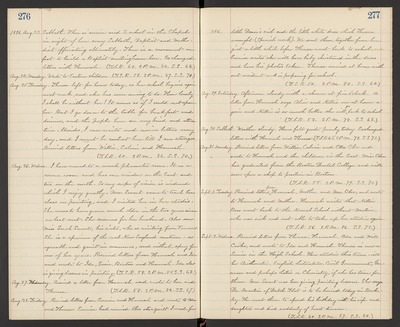 1896. Aug. 23. Sabbath. There is service and S. school in the Chapel in sight of here every Sabbath, Baptist and Methodist officiating alternately. There is a movement on foot to build a Baptist meeting house here. Exchanged letters with Hannah. (T.S.R. 60. 2 P.M. 80. S.S. 68.)

Aug. 25. Tuesday. Theresa left for home today, as her school begins again next week, and she has some sewing to do. How lonely I shall be without her! It seems as if I could not spare her. But I go down to the table for breakfast and dinner, and the people here are very kind and attentive. Besides, I can write and receive letters everyday, and I must be content here till I am stronger. Received letters from Willie, Calvin and Hannah. (T.S.R. 60. 2 P.M. 86. S.S. 70.)

Aug. 26. Wednes. I have moved to a much pleasanter room. It is a corner room and has one window on the East and two on the north. So my scope of vision is widened which I enjoy greatly. Mrs. Smart came to teach her class in painting, and I visited her in her studio. She seems to have grown much older in the two years since we last met. She mourns for her husband. Also saw Miss Sarah Smart, his sister, who is visiting from Vermont. She is a specimen of the real New England nation - so agreeable and quiet in manners, and withal, spry for one of her years. Received letters from Hannah and Ida and wrote to Ida, Susie, Benton and Hannah. Ida also is giving lessons in painting. (T.S.R. 58. 2P.M. 85. S.S. 68.)

Aug.28. Friday. Received letters from Eunice and Hannah and wrote to Ada and Theresa. Eunice had received the starquilt I made for

1896. little Dean's crib and the little white dress which Theresa wrought (Spanish work). We sent them together from here just a little while before Theresa went back to school, and Eunice writes she will have baby christened in the dress and have his photos taken. Theresa arrived at home with out accident and is preparing for school. (T.S.R. 50. 2 P.M. 80. S.S. 64.)

Aug. 31. Monday. Received letters from Willie, Calvin and Etta Ober and wrote to Hannah and the children in the East. Miss Ober has graduated from the Boston Dental Collage and will soon open a shop to practice in Boston. (T.S.R. 55. 2 P.M. 79. S.S. 70.)

Sept. 1 Tuesday. Received letters from Hannah, Mother and Mrs. Ober, and wrote to Hannah and Mother. Hannah writes that Nellie Ross went back to the Normal School without Mertice, who was sick and not able to take up her studies again. (T.S.R. 56. 2 P.M. 86. S.S. 73.)

Sept. 2. Wednes. Received letters from Theresa, Hannah, Ada and Will Cooke, and wrote to Ida and Hannah. Theresa is now a Senior in the High School. Her Studies this term will be Arithmetic. English Literature, Civil Government, German and perhaps Latin or Chemistry, if she has time for them. Mrs. Smart was here giving painting lessons. She says Dr. Martin of Dutch Flat is to be buried today in Berkeley. He went then to spend his birthday with his wife and daughters and died suddenly of heart disease. (T.S.R. 60. 2 P.M. 87. S.S. 80.)