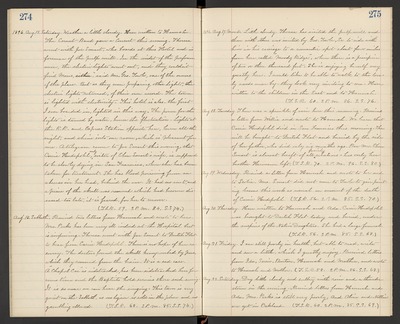 1896. Aug. 15. Saturday. Weather a little cloudy. Have written to Hannah. The Cornet Band gave a Concert this evening. Theresa went with Joe Smart, who boards at this Hotel and is foreman of the Pulp mill. In the midst of the performance, the electric lights went out, and "they couldn't find Moses, either", said Mr. Geo. Towle, one of the owners of the place. But as they were preparing other lights, the electric lights returned, of their own accord. The town is lighted with electricity. This hotel is also- the first I ever boarded in, lighted in this way. The power for the lights is turned by water, hence the fluctuation. Lights at the R.R. and Express Station opposite here, burn all the night, and shine into our room, which is pleasant for me. A telegram came to Joe Smart this evening, that Carrie Hudepohl, only sister of Eben Smart's wife, is supposed to be slowly dying in San Francisco, where she has been taken for treatment. She has blood poisoning from an abscess in her head, behind the ear. It had no vent, and a piece of the skull was removed which had become diseased too late, it is feared, for her to recover. (T.S.R. 59. 2 P.M. 84, S.S. 74.)

Aug. 16. Sabbath. Received two letters from Hannah and wrote to her. Mrs. Perks has been very ill indeed at the Hospital but is improving. Theresa went with Joe Smart to Dutch Flat to hear from Carrie Hudepohl. There is no hope of her recovery. The doctors found the skull honey combed by pus, which they removed from the brain. It is a sad case. "A chapel Car" is sidetracked, has been sidetracked here for some time and the Baptists hold services there each evening. It is so near we can hear the singing. This town is very quiet on the Sabbath, as no liquor is sold in the place and no gambling allowed. (T.S.R. 60. 2 P.M. 85, S.S. 74.)

1896. Aug. 17. Mond. Little cloudy. Theresa has visited the pulp mill and then with others was invited by Geo. Towle, Sr to ride with him in his carriage to a romantic spot about four miles from here called "Moody Ridge", where there is a precipice of two or three thousand feet. She is enjoying herself very greatly here. I would like to be able to walk to the lovely woods near by - they look very inviting to me. Have written to the children in the East and to Hannah. (T.S.R. 60. 2 P.M. 86. S.S. 76.)

Aug. 18. Tuesday. There was a sprinkle of rain here this morning. Received a letter from Willie and wrote to Hannah. We learn that Carrie Hudepohl died in San Francisco this morning. She will be brought to Dutch Flat and buried by the side of her father, who died only six months ago. Pros Mrs. Eben Smart is almost bereft of all family relatives - has only her brother Hermann left. (T.S.R. 70. 2 P.M. 80. S.S. 80.)