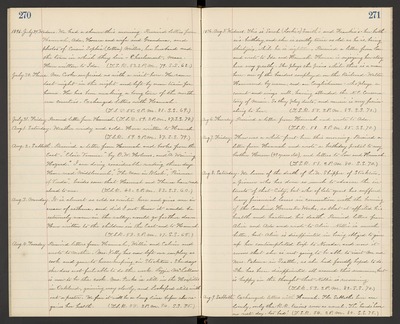 Aug. 4. Tuesday. Received letters from Hannah, Willie and Calvin and wrote to Mother. Mrs. Kelly has now left our employ as cook and gone to housekeeping in Stockton. She says she does not feel able to do the work. Lizzie McLellan is now to be the cook. Mrs. Perks is still in the Hospital in Oakland, gaining very slowly, and Lockeford still without a pastor. We fear it will be a long time before she regains her health. (T.S.R. 55. 2 P.M. 84. S.S. 75.)

1896. Aug. 5. Wednes. This is Sarah (Locke's) Smith's and Frankie's, her brother's - birthday, and she is exactly twice as old as he is, being thirtysix, while he is eighteen. Received a letter from Lou and wrote to Ida and Hannah. Theresa is enjoying her stay here very greatly. She plays the piano while there is a man here - one of the boarders employed on the Railroad - Walter Hammond by name, and on Englishmen - who plays a cornet and sings well, having attended the N.E. Conservatory of Music. So the play duets, and music is very fascinating to her. (T.S.R. 55. 2 P.M. 83. S.S. 72.)

Aug. 8. Saturday. We learn of the death of L.U. Shippee of Stockton, a pioneer who has done so much to advance the interests of that City, but who of late years has suffered heavy financial losses in connection with the burning of the Combined Harvester Works, so that it affected his health and hastened his death. Received letters from Alice and Ada and wrote to Alice. Nellie is much better, but Alice is disappointed in being obliged to give up her contemplated trip to Nevada, and now it seems that she is not going to be able to visit Mr. and Mrs. Palmer in Seattle, as she had fondly hoped to do. She has been disappointed all around this summer, but is happy in the thought that Nellie is recovering. (T.S.R. 53. 2 P.M. 82. S.S. 70.)