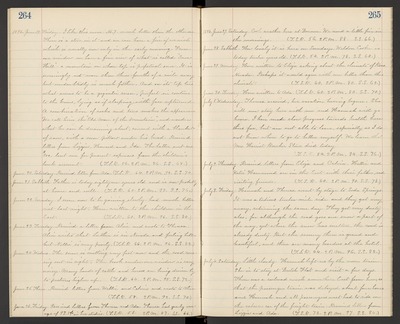 1896. June 19. Friday. I like this room No.7 much better than the other one. There is a stove in it and we can have a fire if we wish which is usually now only in the early morning. From our window we have a fine view of what is called "Snow Hill" - a mountain on whose top is perpetual snow. It is seemingly not more than three-fourths of a mile away but undoubtedly is much farther. And on its top his what seems to be gigantic man, perfect in contour to the knees, lying as if sleeping, with face upturned. A combination of rocks and trees makes the appearance We call him the "Old Man of the Mountain," and wonder what he can be dreaming about, covered with a blanket of snow, with a snow pillow under his head. Received letters from Lizzie, Howard and Ida. The latter send me $700. let me for present expenses from the children's bank account. (T.S.R. 56. 2 P.M. 86. S.S. 68.)

July 1. Wednesday. Theresa arrived, her vacation having begun. She will now stay here with me and Hannah will go home. I have made slow progress towards health here thus far, but am not able to leave, especially as I do not know where to go to better myself. We learn that Mrs. Hariet Beecher Steve died today. (T.S.R. 54. 2 P.M. 84. S.S. 76.)

July 3. Friday. Hannah and Theresa went by stage to Soda Springs. It was a tedious twelve-mile ride and they got very weary, returning the same day. They got very dusty also, for although the road goes over snow a part of the way, yet where the snow has melted, the road is already dusty. But the scenery there is grand and beautiful, and there are many boarders at the hotel. (T.S.R. 64. 2 P.M. 96. S.S. 82.)

July 4. Saturday. Little cloudy. Hannah left used by the noon train. She is to stay at Dutch Flat and visit a few days. There was a railroad weak somewhere East from here, so that the passenger train was delayed about four hours and Hannah and all passengers west had to ride on the caboose, car of the freight train. Received letters from Lizzie and Ada. (T.S.R. 72. 2 P.M 97. S.S. 84.)