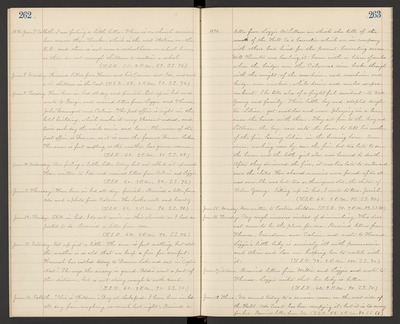 June 9. Tuesday. Have been in bed all day and feverish. Sat up in bed and wrote to George, and received letters from Lizzie and Theresa, John Demongeot and Calvin. The post office is right in the hotel building, which makes it very pleasant indeed, and twice each day the mails arrive and leave. The name of the post office is Donner, as it is near the famous Donner Lake. The snow is fast melting as the weather has grown warmer. (T.S.R. 60. 2 P.M. 85. S.S. 69.)

June 13. Saturday. Sat up just a little, The snow is fast melting, but still the weather is so cold that we keep a fire for comfort. Hannah has walked today to Donner Lake and sat in "Eagle's Nest." She says the scenery is grand. Addie went a part of the distance, but is not strong enough to walk much. (T.S.R. 60. 2 P.M. 90. S.S. 76.)

June 14. Sabbath. This is Children's Day at Lockeford. I have been in bed all day from coughing so much last night. Received a

1896. letter from Lizzie McLellan in which she tells of the much of the Holt Co.'s. harvester which we in company with others had hired for the present harvesting season. Will Hunter was hauling it home with a team of mules when the bridge over the Calaveras river broke through with the weight of the machine, and machine and bridge were wrecked, while driver and mules escaped unhurt. She tells also of a frightful accident to Will Young and family. Their little boy and adopted daughter- Lilian - got matches and were playing in a barn near the house with them. The set fire to the hay and Lilburn, the boy, ran into the house to tell his mother of the fire, leaving Lilian in the burning barn. Some men, working nearly by, saw the fire, but too late to save the barn, and the little girl also, was burned to death. After they discovered the fire, it was too late to enter and save the child. Her charred remains were found after all was over. She was but two or three years old, the child of Helen Young. Sitting up in bed, I wrote to Bro. Josiah. (T.S.R. 65. 2 P.M. 95. S.S. 80.)

June 16. Tuesday. My cough increases instead of diminishing. This does not seem to be the place for me. Received letters from Theresa, Grandma and Calvin, and wrote to Howard. Lizzie's little baby is seriously ill with pneumonia and Alice and Lou are helping her to watch with it. (T.S.R. 72. 2 P.M. 100. S.S. 80.)