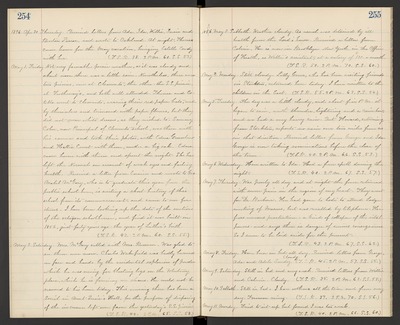 May 1. Friday. Not very favorable picnic weather, as it was cloudy and about noon there was a little rain. Nevertheless, there were two picnics, one at Clements, the other - the S.S. picnic, it Tutheway's, and both well attended. Theresa and Estelle went to Clements. Wearing their red paper hats, made by themselves and trimmed with paper flowers, but they did not wear white dresses, as they wished to. Sammy Cohn, now Principal of Clements School, was there with his camera and took their photos, with Edna Greenlow and Hattie Covert with them, under a big oak. Edna came home with them and spent the night. She has left the Normal on account of weak eyes and failing health. Received a letter from Eunice and wrote to Geo. Mabel McGary, who is to graduate this year from the public school here, is waiting a short history of this school from its commencement, and came to me for items. I have been looking up the date of the erection of the octagon school house, and find it was built in 1856, just forty years ago - the year of Luther's birth. (T.S.R. 43. 2 P.M. 60. S.S. 55.)

May 2. Saturday. Mrs. McGary called with Mrs. Russem. Was glad to see them once more. Charles Wakefield was badly burned on face and hands by the accidental explosion of power which he was using for blasting logs on the Whitney place, which he is farming on shares. He could not be removed to his home today. This evening there has been a Social in Aunt Susie's Hall, for the purpose of disposing of the ice cream left over from the yesterday's S.S. picnic. (T.S.R. 44. 2 P.M. 65. S.S. 58.)

May 5. Tuesday. The day was a little cloudy, and about five P.M. it began to rain, with thunder, lightning and a rainbow, and we had a very heavy rain. But Howard, returning from Stockton, reports no rain over two miles from us in that direction. Received letters from George and Ida. George is now taking examinations before the close of the team. (T.S.R. 40. 2 P.M. 66. S.S. 53.)

May 7. Thursday. Was poorly all day and at night the fever returned with severe pain in the region of my heart. They went for Dr. Barbour. He had gone to Lodi to attend Lodge meeting of Masons, but was recalled by telephone. He fears nervous prostration - a kind of collapse of the vital powers - and says there is danger of serious consequences. So I seem to be laid aside for the present. (T.S.R. 43. 2 P.M. 67. S.S. 62.)