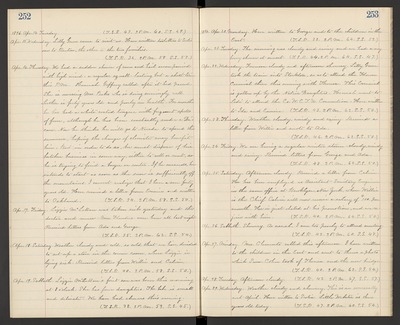 Apr. 16. Thursday. We had a sudden shower of rain and hail accompanied with high wind - a regular squall- lasting but a short time this P.M. Hannah Geffroy called after it had passed. She is nursing Mrs. Perks who is doing seemingly well. Luther is forty years old and poorly in health. For months he has had a white-coated tongue with frequent spells of fever, although he has been constantly under a Dr.'s care. Now he thinks he will go to Nevada to spend the summer, hoping the change of climate may benefit him. But in order to do so, he must dispose of his butcher business in some way, either to sell or rent, so he is trying to find a buyer or renter. If he succeeds, he intends to start as soon as the snow is sufficiently off the mountains. I cannot realize that I have a son forty years old. Have received a letter from Eunice and written to Oakland. (T.S.R. 34. 2 P.M. 58. S.S. 50.)

Apr. 22. Wednesday. Forenoon cloudy and afternoon showery. Lilly Greve took the train into Stockton, so as to attend the Flower Carnival there this evening with Theresa. This Carnival is gotten up by the Native Daughters. Hannah went to Lodi to attend the Co. W.C.T.U. Convention. Have written to Ida and Eunice. (T.S.R. 43. 2 P.M. 62. S.S. 50.)

Apr. 25. Saturday. Afternoon cloudy. Received a letter from Calvin. He has been employed as Assistant Sanitary Engineer in the same office at Brooklyn, New York, where Willie is the Chief. Calvin will now received a salary of $100. per month. He is just elated at his promotion, and we rejoice with him. (T.S.R. 40. 2 P.M. 64. S.S. 50.)