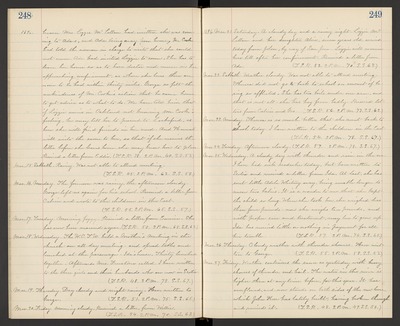 1896. because Mrs. Lizzie McLellan had written she was coming to Ada's, and Ada being away from home, Mr. Cooke had told the woman in charge to write that she could not come. Ada had invited Lizzie to come. She has to leave her home so as to have doctor and nurse in her approaching confinement, as where she lives there are none to be had within thirty miles. George so felt the unkindness of Mr. Cooke's action that he came home to get advise as to what to do. We have told him that if Lizzie arrives in Oakland not knowing Mr. Cooke's feeling, he may tell her to proceed to Lockeford, as here she will find friends in her need. And Hannah will write the same to her, so that if she receives the letter before she leaves home, she may know how to plan. Received a letter from Eddie. (T.S.R. 38. 2 P.M. 60. S.S. 53.)

Mar. 18. Wednesday. The W.C.T.W. held a Mother's Meeting in the church - an all-day meeting - and spread tables and lunched at the parsonage - Ida's house. Thirty lunched together. Afterwards Mrs. Frustone called. I have written to the three girls and their husbands who are now in Scotia. (T.S.R. 48. 2 P.M. 73. S.S. 67.)

Mar. 22. Sabbath. Weather cloudy. Was not able to attend meeting. Theresa did not go back to school on account of being so afflicted. She has two boils under one arm, and that is not all she has hay fever badly. Received letters from Calvin and Geo. (T.S.R. 56. 2 P.M. 73. S.S. 62.)

Mar. 25. Wednesday. A cloudy day with thunder and rain in the eve. I have had sick headache today, but have written to Scotia and received a letter from Ida. At last, she has sent little Adele Whitney away, being unable longer to nurse two babies. It is a wonder to me that she kept the child so long. When she took her, she weighed less than four pounds - now she weighs ten pounds, and with proper care and treatment, may live to grow up. Ida has received little or nothing in payment for all her trouble. (T.S.R. 57. 2 P.M. 74. S.S. 65.)

Mar. 27. Friday. Weather continues the same as yesterday with heavy showers of thunder and hail. The water in the river is higher than at any time before, for this year. It has overflowed, and now stands on both sides of the new levee which John Kerr has lately built, having broken through and ruined it. (T.S.R. 48. 2 P.M. 49. S.S. 50.)