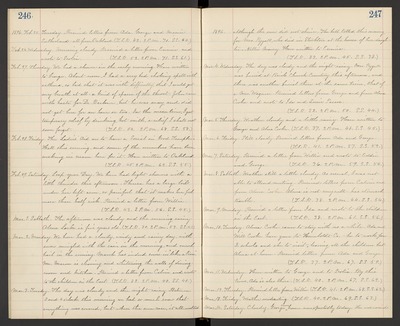 Feb. 27. Thursday. We had a shower in the early morning. Have written to George. About noon, I had a very bad choking spell with asthma, so bad that it was with difficulty that I could get my breath at all - a kind of spasm of the throat. John ran with haste for Dr. Barbour, but he was away and did not get here for an hour or two. In the mean time, I got temporary relief by drinking hot milk, a relief I shall not soon forget. (T.S.R. 54. 2 P.M. 68. S.S. 58.)

Feb. 29. Saturday. Leap-year Day. We have had light showers with a little thunder this afternoon. Theresa has a large boil under her left arm, so painful that it makes her feel more than half sick. Received a letter from Willie. (T.S.R. 43. 2 P.M. 56. S.S. 45.)

Mar. 2. Monday. We have had a cloudy, windy and rainy day, with snow mingled with the rain in the morning, and much hail in the evening. March has indeed come in "like a lion." Mr. Mason is cleaning and whitening the walls of dining-room and kitchen. Received a letter from Calvin and wrote to the children in the East. (T.S.R. 33. 2 P.M. 40. S.S. 40.)

Mar. 3. Tuesday. The day was cloudy and the night rainy. Between 3 and 4 o'clock this morning we had so much snow that everything was covered, but when the sun rose, it all melted

Mar. 4. Wednesday. The day was cloudy and the night rainy. Mrs. Pygall was buried at Brick Church Cemetery this afternoon, and there was another burial there at the same time, that of a Mrs. Wagner. Received letters from George and from Alma Cooke and wrote to Ida and Susie Pascoe. (T.S.R. 32. 2 P.M. 50. S.S. 44.)