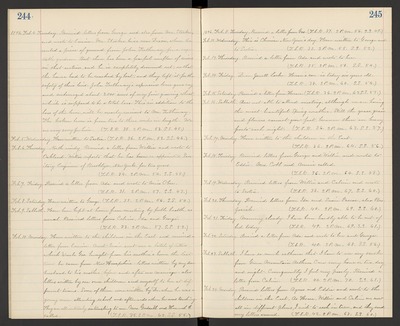 1896.Feb. 4. Tuesday. Received letters from George and also from Mr. Stocker, and wrote to Eunice. Mr. Stocker lives near Dixon, where he rented a piece of ground from John Tutheway, for a vegetable garden. But there has been a fearful overflow of rivers in that section, and he is completely drowned out, so that the house had to be reached by boat, and they left it for the safety of their lives. John Tutheway's expensive lever gave way and submerged about 2000 acres of very fine growing wheat, which is supposed to be a total loss. This in addition to the loss of the lever, will be nearly ruinous to Mr. Tutheway. The broken lever is from two to three miles in length. We are very sorry for him. (T.S.R. 35. 2 P.M. 53. S.S. 45.)

Feb. 10. Monday. Have written to the children in the East and received a letter from Eunice. Aunt Susie sent me a batch of letters which Uncle Geo. brought from his mother's home the last time he came from New Humpshire - letters written by my dear husband to his mother, before and after our marriage - also letters written by our own children and myself to her at different times. Some of them were written by Dr. when he was a young man attending school and afterwards when he was teaching. They were all intensely interesting to me. Mrs. Goodsell and Hannah I. called. (T.S.R. 35. 2 P.M. 63. S.S. 55.)

Feb. 16. Sabbath. Am not able to attend meeting, although we are having the most beautiful spring weather. Still the grass, grain and flowers cannot grow fast because there are heavy frosts each night. (T.S.R. 36. 2 P.M. 63. S.S. 57.)