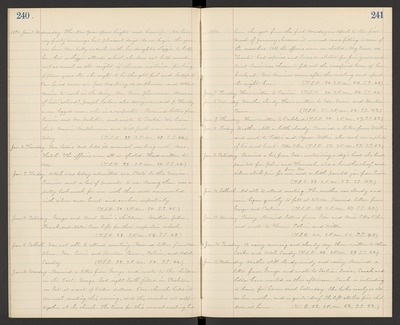 1896. Jan. 1. Wednesday. The New Year opens bright and beautiful. We have very frosty mornings but pleasant days. As we begin the year we have Mrs. Kelly as cook with her daughter Lizzie to help her, but as Lizzie attends school, she does not help much, not as much as she might if she was inclined, for being fifteen years old, she ought to be thoughtful and helpful. Our hired men are Jose Martinez as milkman and Albert Miner to work in the dairy, Mr. Rice, plowman, Mason of Lodi (colored), Joseph Guhan also dairyman, and J. Hardy a one-legged man, who is a carpenter. Received letters from Eunice and Ms. Webster, and wrote to Scotia. We learn that Mamie Matthewson and Will Jack were married today. (T.S.R. 29. 2 P.M. 49. S.S. 44.)

Jan. 3 Friday. Utah was today admitted as a State to the Union. Eunice sent a box of presents to us. Among them was a pretty bookmark for me with three ends ornamented with silver cross, heart and anchor respectively. (T.S.R. 30. 2 P.M. 50. S.S. 45.)

Jan. 6. Monday. Received a letter from George and wrote to the children in the East. George had eight teeth filled in Stockton on Sat. at a cost of twelve dollars. Our church held its Annual meeting this evening, and the members ate supper together at the church. The time for this annual meeting has

1896. been changed from the first Monday in April to the first Mond. of January, because it seemed more fitting to some of the members. All the officer were re-elected. My time as Trustee had expired and I was re-elected for five years, and Aunt Susie was chosen to fill out the unexpired term of her husband. Mrs. Minner came after the meeting and spent the night here. (T.S.R. 30. 2 P.M. 54. S.S. 49.)

Jan. 15. Wednesday. Weather still cloudy, windy and rainy. Received a letter from George and wrote to Scotia. Susie, Sarah, and Lilla have visited us this afternoon. Sarah is intending to leave for home next Saturday. She looks nearly as old as her mother, and is quite deaf. She left all her five children at home. (T.S.R. 52. 2 P.M. 52. S.S. 52.)