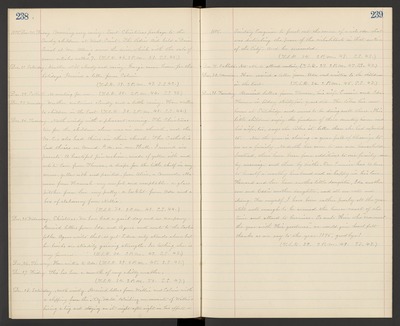 Dec. 24. Tuesday. North windy with a pleasant evening. The Christmas tree for the children alone was in our church, and the M.E.'s also had theirs in their church. The Catholic's had theirs on Mand. P.M. in our Hall. I received six presents. A beautiful pin cushion, made of yellow silk and white lace from Theresa, a drape for the little shelf in my corner, yellow silk and painted, from Alice, a Commode ottaman from Hannah - very useful and acceptable - a glass pitcher from Lou - very pretty - a booklet - from Ada and a box of stationery from Nellie. (T.S.R. 30. 2 P.M. 48. S.S. 44.)

Dec. 25. Wednesday. Christmas. We have had a quiet day and no company. Received letters from Ida and Agnes and wrote to the Scotia folks. Agnes writes that as yet Edna only stands alone but her limbs are steadily gaining strength. In talking she is very forward. (T.S.R. 30. 2 P.M. 47. S.S. 43.)

Dec. 28. Saturday. North windy. Received letters from Willie and Calvin with a clipping from the "N.Y. World" detailing an account of Willie's hiring a tug and staying on it night after night in his efforts a

Dec.31. Tuesday. Received letters from Horace, his wife Eunice and Ida. Horace is today thirty five years old. He likes his new home at Sturbridge and seems to be doing well there. His little children enjoy the freedom of their country home and his wife, too, says she likes it better than she had expected to. Now the year is closing - a year full of blessings to us as a family. No death has come to our own household. Instead, there have been four additions to our family - one by marriage and three by births. Our Eunice has taken to herself a worthy husband and is happy in his love. Howard and Lou have another little daughter, Ida another son and Eddie another daughter, and all are well and strong. For myself, I have been rather poorly all the year still well enough to be around the house most of the time and attend to business. So unto Him who "crownest the year with His goodness," we would give heart felt thanks as we say to the year 1895, goodbye! (T.S.R. 29. 2 P.M. 49. S.S. 43.)