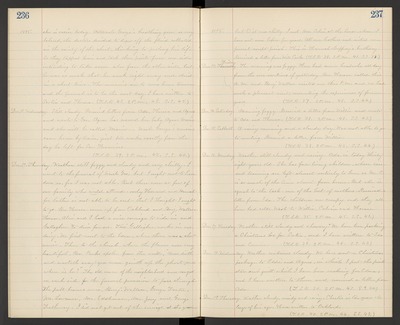 1895. she is easier today. As Uncle George's breathing grew so very labored, the doctors decided to draw off the fluid collected in the cavity of the chest, thinking to prolong his life. So they tapped him and took three pints from one side intending to take some also from the other side, but he was so weak that he sank right away and died in a short time. The remains are to come home tomorrow and the funeral is to be the next day. I have written to Scotia and Theresa. (T.S.R. 41. 2 P.M. 47. S.S. 45.)

Dec. 11. Wednesday. Still cloudy. Received letters from Ada, Theresa and Agnes and wrote to Geo. Agnes has named her baby Agnes Marie and she will be called Marie. - Uncle George's remains came home by train, just two weeks exactly from the day he left for San Francisco. (T.S.R. 39. 2 P.M. 42. S.S. 40.)

Dec. 12. Thursday. Weather still foggy and cloudy and very chilly. I went to the funeral of Uncle Geo. but I ought not to have done so, for I was not able. But there were so few of our family who could attend - only Howard and Hannah - for Luther is not able to be out - that I thought I ought to go. Bro. Horace came up from Oakland and Benj. Wallace. Horace, Alice and I had a nice carriage to ride in and Gallagher to drive for us. This Gallagher works in our dairy. We first went to the house, where there was a short service. Then to the church, where the flowers were very beautiful. Rev. Perks spoke from the words, "Man dieth and wasteth away; yea man giveth up the ghost, and where is he?" The old men of the neighborhood were ranged on each side for the funeral procession to pass through . The pall-bearers were, Benj. Wallace, George Foster, Mr. Lawrence, Mr. Eddleman, Mr. Jory and George Tutheway. I did not get out of the carriage at the grave.

Dec. 13. Friday. The morning was foggy. Have had severe headache all day from the over-exertions of yesterday. Bro. Horace called this A.M. and Benj. Wallace visited me this P.M. and we had such a pleasant vist, recounting the experiences of former years. (T.S.R. 37. 2 P.M. 48. S.S. 44.)

Dec. 16. Monday. Weather still cloudy and rainy. Ada is today thirty eight years old. She has four living children, whose care and training are left almost entirely to her, as Mr. C. is so much of the time absent from house. But she is equal to the task one of the best of mothers. Received a letter from Ida. The children are croupy and they all have bad colds. Wrote to Willie, Calvin and Horace. (T.S.R. 35. 2 P.M. 45. S.S. 41.)

Dec. 18. Wednesday. Weather continues cloudy. We have sent a Christmas package to Eddie and Agnes, in which I put the pink star crib quilt which I have been making for Edna, and I have written to them and received a letter from Ada. (T.S.R. 30. 2 P.M. 47. S.S. 44.)