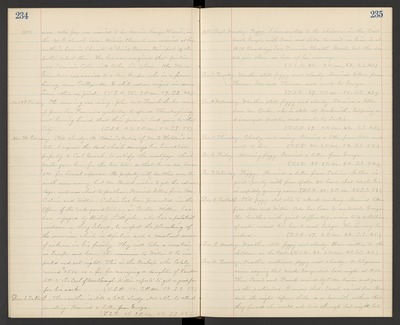 1895. Nellie Jory was married to her cousin, George Hanes, in the M.E. church here. Minnie Clements was married at her mother's home in Clements to David Brown, Principal of the public school there. He has now resigned that position and Sammie Cohn will take his place. Also Flora Grunlaw was married to a Mr. Grupe, who is a farmer living near Collegeville. So while sadness reigns in some homes, other are jovial. (T.S.R. 35. 2 P.M. 57. S.S. 46.)

Nov. 30. Saturday. Still cloudy. As Administratrix of Uncle Holden's estate, I signed the deed which conveys his homestead property to Carl Brueck, to satisfy the mortgage which Uncle gave him for the two lots, so that he could have $300. for burial expenses. The property will doubtless soon be worth more money, but Mr. Brueck wishes to get the advantage, and was about to foreclose. Received letters from Ada, Calvin and Willie. Calvin has been promoted in the Office of the Underground Railway in Boston. Willie has been engaged by Bishop Littlejohn, who has a palatial residence on Long Island, to inspect the plumbing of the mansion which is defective and a constant source of sickness in his family. They will take a vacation in Europe and leave the mansion to Willie to be inspected and set right. This is the Bishop who lately received $2500. as a fee for marrying a daughter of Vanderbilt to the Earl of Marlborough. Willie expects to get a good fee for his work. (T.S.R. 40. 2 P.M. 58. S.S. 53.)

Dec. 8. Sabbath. Still foggy. Not able to attend meeting. Received letters from Ada and Willie. Ada has bear to see Uncle George. He breathes with great difficulty, owing to a collection of water around his heart and lungs. He is very low indeed. (T.S.R. 37. 2 P.M. 49. S.S. 45.)

Dec. 10. Tuesday. Weather continues foggy and cloudy. A telegram came saying that Uncle George died last night at 9:30. Then Sarah and Frank arrived by P.M. train and gave us the particulars. It seems that Sarah arrived from Ferndale the night before. Lilla is so low with asthma that they feared she would not live through last night, but