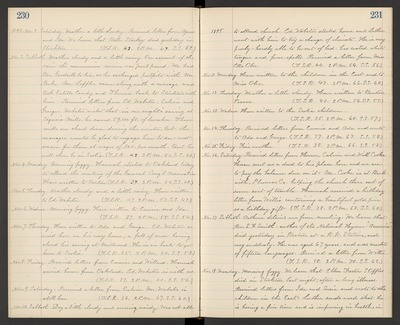 Nov. 3. Sabbath. Weather cloudy and a little rainy. On account of the rain the communion service was postponed. We had Rev. Goodsell to tea, as he exchanged pulpits with Mr. Perks. Mr. Leffler came along with a carriage and took Estella Condy and Theresa back to Stockton with him. Received letters from Ed. Webster, Calvin and George. Webster writes that in one night's sawing at Sequoia Mills, he sawed 59,000 ft. of lumber. These mills are closed down during the winter, but the manager would be glad to engage him to saw next season for them at wages of $120. per month. But he will then be in Scotia. (T.S.R. 43. 2 P.M. 54. S.S. 48.)

Nov. 10. Sabbath. Day a little cloudy and evening windy. Who not able

Nov. 16. Saturday. Received letters from Horace, Calvin and Will Cooke. Horace sent us a deed to his place here and we are to pay the balance due on it. Mr. Cooke is at Beckwith, Plumas Co. helping the church there out of some sort of trouble. Hannah received a birthday letter from Willie containing a beautiful gold pin as a birthday gift. (T.S.R. 38. 2 P.M. 68. S.S. 60.)

Nov. 18. Monday. Morning foggy. We learn that Ellen Foster Stoffles died in Stockton last night, after a long illness. Received letters from Ida and Susie and wrote to the children in the East. Luther sends word that he is having a fine time and is improving in health, in