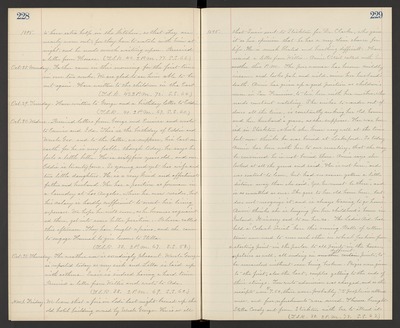 Oct. 30. Wednes. Received letters from George and Eunice and wrote to Eunice and Ida. This is the birthday of Eddie and Uncle Geo. and to the latter, we suppose, his last on earth, for he is very feeble, though today, he says he feels a little better. He is sixty five years old, and our our Eddie is twenty four. So young, and yet has wife and two little daughters. He is a very kind and affectionate father and husband. He has a position as foreman in a laundry at Los Angeles, where he now resides, but his salary is hardly sufficient to meet his living expenses. We hope he will soon, as he becomes acquainted there, get into some better position. Rebecca called this afternoon. They have bought a piano, and she came to engage Hannah to give lessons to Stella. (T.S.R. 38. 2 P.M. 67. S.S. 58.)

Oct. 31. Thursday. The weather now is exceedingly pleasant. Uncle George is reported today as very sick and Lilla is laid up with asthma. Susie is indeed having a hard time. Received a letter from Willie and wrote to Ada. (T.S.R. 38. 2 P.M. 69. S.S. 62.)

Nov. 1. Friday. We learn that a fire in Lodi last night burned up the old hotel building owned by Uncle George. He is so ill

1895. that Susie sent to Stockton for Dr. Clarke, who gives it as his opinion that he has a very slim chance for life. He is much bloated and breathing difficult. Have received a letter from Willie. - Annie O'Neil called with her mother this P.M. The poor woman has become mildly insane, and looks pale and wild, since her husband's death. Annie has given up a good position as children's nurse in San Francisco, to live here with her mother, who needs constant watching. She wishes to wander out of doors all the time, is constantly seeking her old home and her husband's grave, as she supposes. He was buried in Stockton, which she knew very well at the time but not thinks he was buried at Lockeford. So today Annie has been with her to our cemetery, that she may be convinced he is not buried there. Annie says she looked at all the graves and said. "He is not here," and was content to leave, but had no sooner gotten a little distance away than she said, "Yes, he must be there," and is as unsettled as ever. She goes to her old home here, but does not recognized it, and is always teasing to go "home." Annie thinks she is longing for her childhood's home in Ireland. It is very sad to see her so. The Ladies Aid has held a "Cobweb Social" here this evening. Balls of cotton twine were used to cross each other in cobweb far him from a starting point in the parlor to all points in the house, upstairs as well, all ending in different points, to be unraveled without once being broken. Prizes were given to the first, also the last, couples getting to the ends of this strings. Ten cents admission was charged, and as the receipts were $7.50, there were probably 75 people in attendance, and free refreshments were served. Theresa brought Stella Condy out from Stockton with her to attend it. (T.S.R. 38. 2 P.M. 73. S.S. 63.)