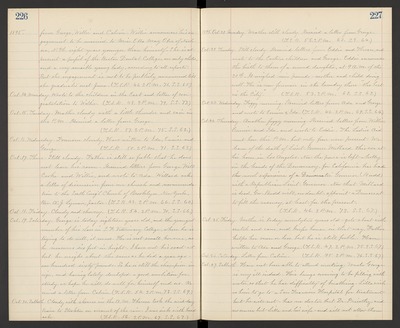 1895. from George, Willie and Calvin. Willie announces his engagement to be married to Miss Etta May Ober of Nashua, N.Y. eight years younger than himself. She is at present a pupil of the Boston Dental College, an only child, and a very amaible young lady, according to all reports. But the engagement is not to be publicly announced till she graduates next June (T.S.R. 46. 2 P.M. 76. S.S. 65.)

Oct .17. Thurs. Still cloudy. Father is still so feeble that he does not leave his room. Received letters from George Will Cooke and Willie, and wrote to Ada. Willard asks a letter of dismission from our church and recommendation to the South Cong'l Church of Brooklyn, New York, Rev. A.J. Lyman, pastor. (T.S.R. 48. 2 P.M. 66. S.S. 60.)

Oct. 19. Saturday. George is today eighteen years old, and the youngest member of his class in S.F. Veterinary College, where he is trying to do well, it seems. He is not small, however, as he measures six feet in height. I have not his exact wt. but he weighs about the same as he did a year ago - one hundred sixty pounds. So he is still the champion in size, and having lately developed a good ambitions for study, we hope he will do well for himself and us. Received a letter from Calvin. (T.S.R. 54. 2 P.M. 73. S.S. 69.)

Oct. 24. Thursday. Another foggy morning. Received letters from Willie, Eunice and Ida, and wrote to Eddie. The Ladies Aid met here this P.M. but only four were present. We learn of the death of Lieut. Governor Millard this eve at his home in Los Angeles. Now the power is left wholly in the hands of the Democracy, for California has had the novel experience of a Democratic Governor (Budd) with a Republican Lieut. Governor. Now that Millard is dead, Gov Budd will, no doubt, appoint a Democrat to fill the vacancy, at least, for the present. (T.S.R. 46. 2 P.M. 73. S.S. 67.)

Oct. 27. Sabbath. Have not been able to attend meeting. Uncle George is very ill indeed. His lungs seeming to be filling with water, so that he has difficulty of breathing. Lilla wishes him to go to a San Francisco Hospital for treatment but he will not - has no doctor but Dr. Priestly, and no nurse but Lilla and his wife - and will not allow them