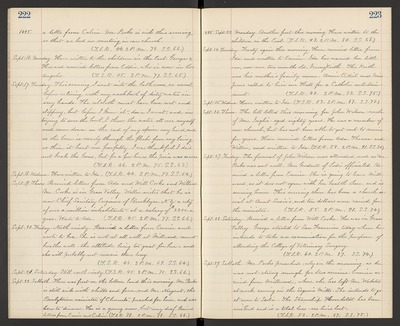 Sept. 17. Tuesday. This evening, I went into the bathroom, as usual, before retiring, with my wash bowl of dirty water in my hands. The oil cloth must have been wet and slippery, but before I knew it, down I went, and in trying to save the bowl, I threw the water all over myself and came down on the end of my spine very hard, and as the bone is nearly through the flesh from my being so thin, it hurt me fearfully. I was thankful I did not break the bones, but for a few hours the pain was severe. (T.S.R. 46. 2 P.M. 75. S.S. 63.)

Sept. 22. Sabbath. There was frost on the bottom land this morning. Mr. Perks is still sick with chills and fever, and Mr. Nugent, the Presbyterian minister of Clements, preached for him, and was here to dinner. He is a young man, but very deaf. Received letters from Eunice and Calvin. (T.S.R. 38. 2 P.M. 78. S.S. 66.)

Sept. 24. Tuesday. Frosty again this morning. Have received letter from Ida and written to Eunice. Ida has named her little one, now over two months old, Irving Keith. The Keith was his mother's family name. Annie O'Neil and Miss Jones called to hire our Hall for a Catholic entertainment. (T.S.R. 42. 2 P.M. 83. S.S. 75.)

Sept. 27. Friday. The funeral of John Wilson was attended, and as Mr. Perks was not well. Rev. Goodsell of Lodi officiated. Received a letter from Eunice. She is going to leave Millwood, as it does not agree with her health there, and is coming home. This evening there has been a church social at Aunt Susie's, and ten dollars were raised for the minister. (T.S.R. 55. 2 P.M. 91. S.S. 74.)

Sept. 28. Saturday. Received a letter from Will Cooke. He was in Grass Valley. George started to San Francisco today where he intends to take an examination for the purpose of attending the College of Veterinary Surgery. (T.S.R. 60. 2 P.M. 87. S.S. 74.)

Sept. 29.Sabbath. Mr. Perks preached only in the morning as he was not strong enough for two services. Eunice arrived from Millwood, where she has left Mr. Webster at work sawing in the Sequoia Mills. She intends to go at once to Scotia. The Steamship Humboldt has been wrecked and is a total loss - no lives lost. (T.S.R. 52. 2 P.M. 87. S.S. 75.)