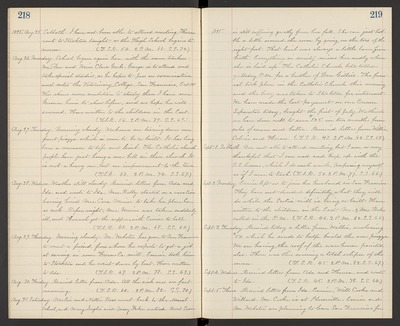 Aug. 26. Monday. School began again here with the same teachers - Mr. Dow and Miss Clara Grubs. George is to attend and take special studies, as he hopes to pass an examination and enter the Veterinary College, San Francisco, Oct. 1st. He shows more ambition to study than I have ever known him to show before, and we hope he will succeed. Have written to the children in the East. (T.S.R. 56. 2 P.M. 79. S.S. 69.)

Aug. 27. Tuesday. Morning cloudy. Workmen are tearing down our front piazza which is soon to be re-built. It has long been a menace to life and limb. The Catholic church people have just hung a new bell in their church. It is not a heavy one, but an improvement to the town. (T.S.R. 50. 2 P.M. 74. S.S. 67.)

Aug. 28. Wednes. Weather still cloudy. Received letters from Ada and Ida and wrote to Ida. Mrs. Kelly started on a vacation having hired Mrs. Cora Miner to take her place here as cook. Before night, Mrs. Miner was taken suddenly ill, and Hannah got the supper, with Eunice to help. (T.S.R. 48. 2 P.M. 68. S.S. 60.)

1895. is still suffering greatly from her fall. She can just hobble a little around the room by going on the toes of the right foot. That limb was always a little lame from birth. Everything in society misses her sadly where she is laid up. The Catholic Church bell tolled yesterday P.M. for a brother of Dan Gillies. The funeral took place in the Catholic Church this morning and the body was taken to Stockton for interment. We have made the last payment on our Cream Separator today, bought the first of July. We think we have done well to save $125. in two months from sales of cream and butter. Received letters from Willie, Calvin and Horace. (T.S.R. 47. 2 P.M. 82. S.S. 69.)

Sept. 5. Thurs. Received letter from Ida, Eunice, Will Cooke and Willard. Mr. Cooke is at Placerville. Eunice and Mr. Webster are planning to leave San Francisco for