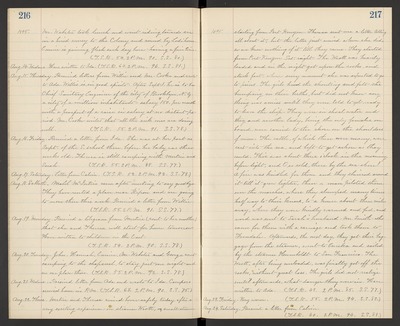 Aug. 15. Thursday. Received letters from Willie and Mr. Cooke and wrote to Ada. Willie is in good spirits. After Sept. 1. he is to be Chief Sanitary Engineer of the city of Brooklyn, N.Y. a city of a million inhabitants - salary $150. per month with a prospect of a raise in salary at no distant period. Mr. Cooke writes that all the sick ones are doing well. (T.S.R. 55. 2 P.M. 91. S.S. 78.)

starting from Port Kenyon. Theresa sent me a letter telling all about it, but the letter just arrived when she did, so we knew nothing of it till they come. They started from Port Kenyon Sat. night. The Weott was heavily loaded and in the night got upon the rocks, and stuck fast, where every moment she was expected to go to pieces. The girls heard the shouting and felt the bumping in their berths, but did not know any thing was amiss until they were told to get ready to leave the shop. They were in shoal water and they and another lady, being the only females on board, were carried to the shore on the shoulders of men. The cattle, of which there were many, were cast into the sea, and left to get ashore as they could. This was about three o'clock in the morning, before light, and O so cold, there by the sea-shore! A fire was kindled for them and they shivered around it till it grew lighter, then a man piloted them over the marshes, where they slumped many times half way to their knees, to a house about three miles away, where they were kindly warmed and fed, and word was sent to Sarah's husband - Mr. Smith - who came for them with a carriage and took them to Ferndale. Afterwards, the next day, they got their baggage from the steamer, went to Eureka and sailed by the steamer Humboldt to San Francisco. The Weott, after being unloaded, was finally got off the rocks, without great loss. The girls did not realize until afterwards, what danger they were in. Have written to Ada. (T.S.R. 48. 2 P.M. 85. S.S. 77.)