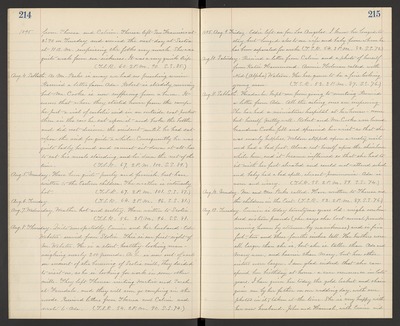 Aug. 4. Sabbath. As Mr. Perks is away we had no preaching service. Received a letter from Ada. Robert is steadily recovering but Mr. Cooke is now suffering from a burn. It seems that when they started home from the camp he put a vial of carbolic acid in an outside coat pocket then in the cars he sat upon it and broke the bottle and did not discover the accident until he had sat upon the acid for quite a while. Consequently he was quite badly burned and cannot sit down at all has to eat his meals standing, and lie down the rest of the time. (T.S.R. 67. 2 P.M 100. S.S. 89.)

Aug.8 Thursday. Quite unexpectedly, Eunice and her husband - Edw. Webster - arrived from Scotia. This is our first sight of Mr. Webster. He is a stout, healthy-looking man - weighing nearly 200 pounds. As he is now out of work on account of the burning of Scotia mill, they decided to visit us, as he is looking for work in some other mills. They left Theresa visiting Mertice and Sarah at Ferndale, and they will soon go camping in the woods. Received letters from Theresa and Calvin and wrote to Ada. (T.S.R. 54. 2 P.M. 90. S.S. 74.)

Aug. 11. Sabbath. Headache kept me from gong to meeting. Received a letter from Ada. All the ailing ones are improving. She has had a miniature hospital at her house - none but herself pretty well. Robert and Mr. Cooke were burned. Grandma Cooke fell and sprained her wrist so that she was nearly helpless. Weldon stepped upon a rusty nail and had a bad foot. Alma cut herself upon the shinbone while here, and it became inflamed so that she had to sit with her foot elevated and could not attend school and baby had a bad spell, almost pneumonia. Ada is worn and weary. (T.S.R. 58. 2 P.M. 89. S.S. 74.)

Aug. 13. Tuesday. Eunice is today twenty one years old - weighs one hundred sixteen pounds (she says she lost several pounds coming home by steamer by sea sickness) and is five feet, two and three-fourths inches tall. Her brothers were all larger than she is, but she is taller than Ada and Mary were, and heavier than Mary, but her other sisters were larger. I am glad indeed that she can spend her birthday at home - a rare occurrence in late years. I have given her today the gold locket and chain given me by her father on our wedding day, with our photos in it, taken at the time. She is very happy with her new husband. John and Hannah, with Eunice and