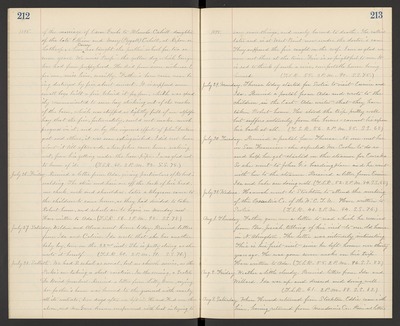 1895. of the marriage of Oscar Grubs to Blanche Cahill - daughter of the late Ellison and Mary (Pygall) Cahill, at Ripon or Lathrop, where Oscar has taught the public school for two or more years. We miss "Purp" - the yellow dog which George has had from puppy hood. He died from some sickness. I, for one, miss him, sensibly. Father's barn came near being destroyed by fire about sunset. It is supposed some small boys built a fire behind it for fun, which was speedily communicated to some hay sticking out of the cracks of the barn, which was stuffed so tightly full of new alfalfa hay that the fire, fortunately, could not make much progress in it, and so by the vigorous efforts of John Demangrot and others, it was soon extinguished. I did not hear about it till afterwards, when John came home soaking wet, from his getting under the hose-pipe. I was glad not to know it. (T.S.R. 60. 2 P.M. 92. S.S. 78.)

July 26. Friday. Received a letter from Ada, giving particulars of Robert's scalding. The skin and have one off the back of his head, one cheek, neck and shoulders. Later a telegram came to the children to come home, as they had decided to take Robert home. and schools are to begin on Monday next. Have written to Ada. (T.S.R. 56. 2 P.M. S.S. 78.)

July 28. Sabbath. We had S. school as usual, but no church service, as the Perk's are taking a short vacation. In the evening, a Scotch Dr. Baird preached. Received a letter from Lilly Greve, saying her father's house was burned to the ground with nearly all its contents, two days after we left it. He and Fred now there alone, and Mr. Greve became overpowered with the heat in trying to

1895. save some things, and nearly burned to death. He called later and is at West Point now under the doctor's care. They supposed the fire caught on the roof. I am so glad we were not there at the time. Fire is so frightful to me. It is sad to think of such a nice, comfortable house being burned. (T.S.R. 55. 2 P.M. 90. S.S. 75.)

July 29. Monday. Theresa today started for Scotia to visit Eunice and Ida. Received a postal from Ada and wrote to the children in the East. Ada writes that they have taken Robert home. He stood the trip pretty well but suffers intensely from the burns - cannot lie upon his back at all. (T.S.R. 56. 2 P.M 85. S.S. 68.)

July 30. Tuesday. Received a postal from Theresa. No one met her in San Francisco - she expected Mr. Cooke to do so and help her get started on the steamer for Eureka. So she went to John G.'s boarding place and he went with her to the steamer. Received a letter from Eunice. Ida and babe are doing well. (T.S.R. 52. 2 P.M 84. S.S. 68.)

Aug. 1. Thursday. Father gave me a letter to read which he received from Bro. Josiah, telling of his visit to our old home in N. Abington. The letter was intensely interesting. This is his first visit since he left home over thirty years ago. He was gone seven weeks on his trip. Have written to Ada. (T.S.R. 55. 2 P.M. 96. S.S. 83.)