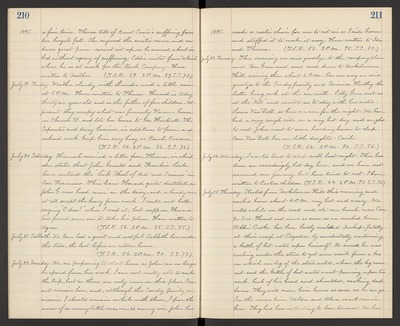 1895. a fine time. Theresa tells Aunt Susie's suffering from her bicycle fall. She injured the sciatic nerve, and endures great pain - cannot sit up, or be moved about in bed without agony of suffering. Eddie writes from Ukiah where he is at work for the Book Company. Have written to Mother. (T.S.R. 59. 2 P.M. 87. S.S. 77.)

July 19. Friday. Weather cloudy, with thunder and a little rain at 5 P.M. Have written to Theresa. Howard is today thirty six years old and is the father of five children. At present they occupy what was formerly Horace's house on Church St. and lets his house to Geo. Hartwell. The Separator and dairy business, in addition to farm and orchard work, keep him very busy as Ranch Oversees. (T.S.R. 56. 2 P.M. 86. S.S. 76.)

July 20. Saturday. Hannah received a letter from Theresa, in which she states that John Gerould and Frankie Locke have entered the "Lick School of Arts and Sciences" in San Francisco. This leaves Howard quite destitute, as John G. was "head man" in the dairy, and handy man at all except the heavy farm work. I could not help saying "O dear!" when I read it, but suppose Howard has found same one to take his place. Have written to Agnes. (T.S.R. 56. 2 P.M. 85. S.S. 75.)

July 22. Monday. We are preparing to start home as John can no longer be spared from his work. I am not really able to make the trip, but as there are only men on this place, I cannot remain here, and although the Sandoz family are anxious I should remain awhile with them, I fear the noise of so many little ones would annoy me. John his

July 23. Tuesday. This morning we said goodbye to the camping place and Mrs. Greve and sons and drove to Mokelumne Hill, arriving there about 6 P.M. On our way we said goodbye to the Sandoz family and Minerva Harthy-the latter being cook at the saw mill. Lilly Greve met us at the "Hill" and invited us to stay with her sister - Laura Van Dell, so here we are for the night. We have had a very rough ride on a very hot day, and are glad to rest. John went to some boarding house to sleep. Mrs. Van Dell has one little daughter - Cecile. (T.S.R. 62. 2 P.M. 91. S.S. 76.)

July 25. Thursday. Started from Mokelumne Hill this morning and reached home about 4 P.M. very hot and weary. We rested a while on the road and ate our lunch near Campo Seco. Heard sad news as soon as we reached home. Robbie Cooke has been badly scalded perhaps fatally at their camp at Cazaders by accidentally overturning a kettle of hot water upon himself. It seems he was reaching under the stove to get some nails from a box on which one leg of the stove rested, when the leg came out and the kettle of hot water went pouring upon his neck, back of his head and shoulders, making deep burns. They will move him home as soon as he can go. In the mean time, Weldon and Alma must remain here. They had been intending to leave tomorrow. We hear