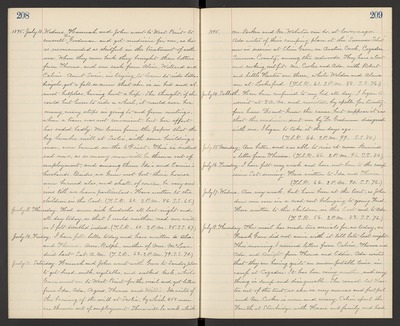 1895. July 10. Wednes. Hannah and John went to West Point to consult Dr. Goodman and get medicine for me, as he is recommended as skilful in the treatment of asthma. Where they came back they brought three letters from Theresa, and one each from Alice, Willard and Calvin. Aunt Susie, in trying to learn to ride Lillas bicycle, got a fall so severe that she is in bed and almost helpless, having hurt a hip. She thought, if she could but learn to ride a wheel, it would save her many weary steps in going to and from meetings, when a team was not convenient but her effort has ended badly. We learn from the papers that the big lumber mill at Scotia, with some buildings near, were burned on the 6th inst. This is indeed sad news, as so many men will be thrown out of employment, and among them Ida's and Eunice's husbands. Besides, we know not but their homes were burned also, and shall, of course, be very anxious till we learn particulars. Have written to the children in the East. (T.S.R. 60. 2 P.M. 86. S.S. 65.)

July 13. Saturday. Hannah and John went with Greve to Sandoz place to get bread, milk, vegetables, and walked back, while Greve went on to West Point for the mail and got letters from Ida, Ada, Agnes, Theresa and Willie. Ida writes of the burning of the mill at Scotia, by which 450 men are thrown out of employment. There will be work which

1895. Mr. Parker and Mr. Webster can do, at lower wages. Ada writes of their camping place at the "Summer School" now in session at Elim Grove, on Austin Creek, Cazaders, Sonoma County, among the redwoods. They have a tent and cooking outfit. Mr. Cooke and Ada, with Robert and little Hester are there, while Weldon and Alma are at Lockeford. (T.S.R. 61. 2 P.M. 88. S.S. 76.)

July 18. Thursday. The mail has made two arrivals for us today, as Frank Greve did not arrive with it till late last night. This morning, I received letters from Calvin, Theresa and Ada, and tonight from Theresa and Eddie. Ada writes that they are having quite an uncomfortable time in camp at Cazaders. It has been rainy weather, and everything is damp and disagreeable. She cannot let Hester out of the tent, so she is very nervous and fretful and Mr. Cook is worn and weary. Calvin spent the Fourth at Sturbridge with Horace and family and had