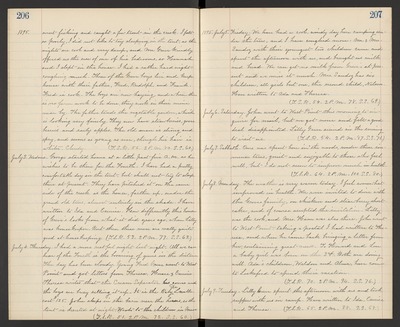 1895. went fishing and caught a few trout in the creek. I felt so poorly, I did not like to try sleeping in the tent, as the nights are cool and very damp, and Mr. Greve kindly offered us the use of one of his bedrooms, so Hannah and I slept in the house. I had a rather hard night coughing much. Three of the Greve boys live and keep house with their father, Fred, Rudolph and Frank. Fred is cook. The boys are now having, and when there is no farm work to be done, they work in their mine near by. The father tends the vegetable garden, which is looking very finely. They now have strawberries, goose berries and early apples. The old man is strong and spry, and seems as young as ever, though his hair is whiter. Cloudy. (T.S.R. 56. 2 P.M. 80. S.S. 60.)

July 3. Wednes. George started home at a little past five A.M. as he wishes to be there for the Fourth. I have had a pretty comfortable day in the tent, but shall not try to sleep there at present. They have pitched it on the same ride of the creek as the house, farther up, under the grand old trees, almost entirely in the shade. I have written to Ida and Eunice. How differently this house of Greve's looks from what it did years ago, when Lilly was housekeeper. But then these men are really quite good at house keeping. (T.S.R. 53. 2 P.M. 77. S.S. 63.)

July 4. Thursday. I had a more restful night last night. All we can hear of the Fourth is the booming of guns in the distance. The day has been cloudy. Young Fred Greve went to West Point and got letters from Theresa, Horace & Eunice. Theresa writes that the Cream Separator has come and the boys are busy setting it up. It is the Baby De Lovelle. cost $125. John sleeps in the barn near the horses, so the tent is deserted at night. Wrote to the children in Mass. (T.S.R. 51. 2 P.M. 72. S.S. 60.)

1895. July 5. Friday. We have a cool, windy day here camping under the trees, and I have coughed more. Mr. & Mrs. Sandoz with their youngest two children came and spent the afternoon with us, and brought us milk and bread. We can get no milk from Greve's at present and we miss it much. Mrs. Sandoz has six children, all girls but one, the second child, Nelson. Have written to Ada and Theresa. (T.S.R. 54. 2 P.M. 78. S.S. 69.)

July 8. Monday. The weather is very warm today. I feel somewhat improved in health. We were invited to dine with the Greves family, on chicken and strawberry short cake, and of course accepted the invitation. Lilly was the cook, and Mrs. Ham was also there. John went to West Point, taking a postal I had written to Theresa, and when he came back bringing a letter from her, containing great news. To Howard and Lou a baby girl was born on the 3rd. Both are doing well. Ada's children, Weldon and Alma, have come to Lockeford to spend their vacation. (T.S.R. 70. 2 P.M. 94. S.S. 76.)