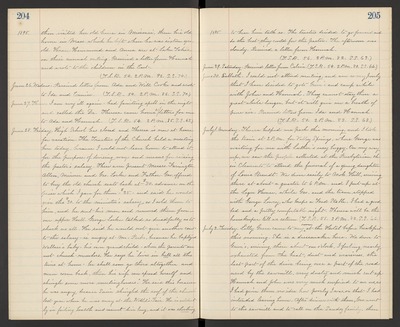 1895. then visited her old home in Missouri, then his old home in Mass which he left when he was sixteen yrs. old. Horace Hammond and Anna are at Lake Tahoe on their annual outing. Received a letter from Hannah and wrote to the children in the East. (T.S.R. 54. 2 P.M. 92. S.S. 74.)

June 28. Friday. High School has closed and Theresa is now at home for vacation. The Trustees of the Church held a meeting here today, because I could not leave home to attend it, for the purpose of devising ways and means for raising the pastor's salary. There were present Messrs. Farrington, Allen, Minner and Geo. Locke and Father. Geo. offered to buy the old church seats back at $30. advance on the price which I gave for them - $25.- and said he would give the $30. to the minister's salary, so I sold them to him, and he sent his men and removed them from our upper Hall. George Locke talked so dreadfully as to shock us all. He said he would not give another cent to the salary - is angry at Mr. Perks, because he baptized Wallace's baby - his own grandchild - where the parents are not church-members. He says he "lives in hell all the time at home - he shall soon go there altogether and never come back, then his wife can spread herself and shingle some more meeting houses." He said this because he was angry because Susie shingled the roof of the church last year where he was away at the World's Fair. He is evidently in failing health and cannot live long, and it was shocking

June 30. Sabbath. I could not attend meeting, and am so very poorly that I have decided to go to Greve's and camp awhile with John and Hannah. They cannot stay there a great while longer, but it will give me a breath of pure air. Received letters from Ida and Hannah. (T.S.R. 50. 2 P.M. 83. S.S. 68.)

July 1. Monday. Theresa helped me pack this morning, and I took the train at 2 P.M. for Valley Springs, where George was waiting for me with Luther's easy buggy. On my way up, we saw the people collected at the Presbyterian Ch. in Clements to attend the funeral of a young daughter of Louis Brandt. We drove easily to Mok. Hall, arriving there at about a quarter to 6 P.M. and I put up at the Leger House, while Geo. and the team stopped with George Lowry, who keeps a Feed Stable. I had a good bed and a pretty comfortable night. Theresa will be the housekeeper till we return. (T.S.R. 51. 2 P.M. 82. S.S. 66.)

July. 2. Tuesday. Lilly Greve came to my room at the Hotel before breakfast this morning. She is a dressmaker here. We drove to Greve's arriving there about one o'clock, I feeling nearly exhausted from the heat, dust and weariness, the last part of the drive being over a part of the road used by the sawmill, very dusty and much cut up. Hannah and John were very much surprised to see us, as I had given them no idea how poorly I was, or that I had intended leaving home. After dinner with them, Geo. went to the sawmill and to call on the Sandoz family, then