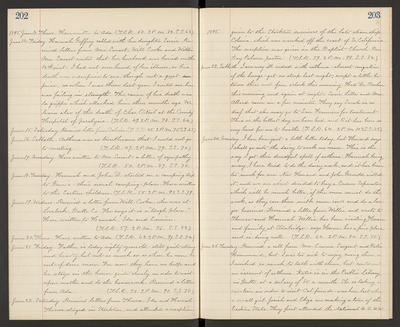 June 14. Friday. Hannah Geffroy called with her daughter Susie. Received letters from Mrs. Smart, Will Cooke and Willie. Mrs. Smart writes that her husband was buried on the 12th inst. I had not even heard of his illness, so his death was a surprise to me, though not a great surprise, as when I was there last year. I could see he was failing in strength. The cause of his death was to grippe which attacked him three months ago. We learn also of the death of Chas. O'Neil at the County Hospital of paralysis. (T.S.R. 49. 2 P.M. 78. S.S. 64.)

June 21. Friday. Father is today eighty years old - still quite strong and hearty, but not as much so as when he can be out of doors more. For now they have no help and he stays in the house quite closely in order to wait upon mother and do the housework. Received a letter from Ada. (T.S.R. 50. 2 P.M. 90. S.S. 78.)

June 23. Sabbath. I am very ill indeed with asthma - almost congestion of the lungs - got no sleep last night, except a little between three and four o'clock this morning. Had Dr. Barbour this morning and again at night. Susie, Lilla and Mrs. Allard came in a few minutes. They say Sarah is so deaf that she may go to San Francisco for treatment. This is the hottest day we have had, and O it has been so very hard for me to breathe. (T.S.R. 64. 2 P.M. 103. S.S. 85.)

June 24. Monday. I have been just a little better today, but Howard says I shall go into the dairy to work no more. This is the way I got this dreadful spell of asthma. Hannah being away, I have tried to do the dairy work, and it has been too much for me. Now Howard and John Gerould will do it, and we are about decided to buy a Cream Separator which will be much better, if the men must do the work, as they can then milk more cows and do a larger business. Received a letter from Willie and wrote to Theresa and Hannah. Willie has been visiting Horace and family at Sturbridge - says Horace has a fine place and is doing well. (T.S.R. 64. 2 P.M. 94. S.S. 78.)

June 25. Tuesday. Received a call from Mrs. Emma Sargent and Katie Hammond, but I was too sick to enjoy seeing them, as I wished so much to talk with them. but could not on account of asthma. Katie is in the Public Library in Butte, at a salary of $85. a month. She is taking a vacation in order to visit Cal. friends - was here last when a small girl. Josiah and Eliza are making a tour of the Eastern States. They first attended the National A.O.W.W.